From Russia we arrive in a country where we recognise the alphabet, even if we haven't a clue what the words mean. Finnish has a surplus of vowels, doubling up and sometimes using all five in one word. Playing scrabble here must be the only place in the world where you are thrilled to have four of the letter 'u' to use.  Finland and Croatia could engage in a vowels for consonants swap.

I am excited to return to Helsinki after 36 years and find the old downtown part substantially the same, but with lots more tourists and an abundance of cruise ships (the last bit is not so exciting). When here in 1980 I fell in love with Finnish glassware and bought four iitala (there's those extra vowels) wine glasses and four schnapps glasses and, rather amazingly, carried them in my backpack through the rest of Scandinavia and back to London. Even more surprisingly, only one wine glass has broken over the years - and that was in an earthquake. Yet more astoundingly I find a replacement in the iitala shop in their 'classic' section. There's longevity of design for you.

One of the things that brought me back is the monument honouring the Finnish composer Johan Sibelius. For 36 years this has been one of my most enduring travel memories. No, I'm not a fan of his music, but I am a fan of the sculptor's work. This is a stunning, stunning piece, and while the popular belief is that it resembles an organ the sculptor, Eila Hiltunen, was inspired by nature and the forest (as was Sibelius). 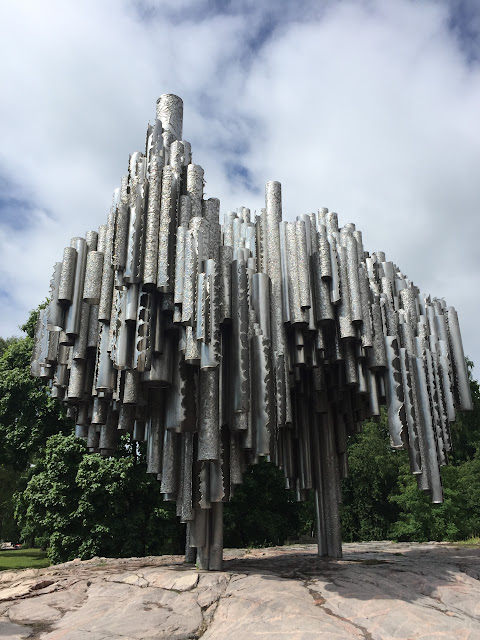 Except for getting to the 300 islands that form part of the city, Helsinki is very walkable - as long as you have a raincoat and umbrella.  Fortunately we took a boat trip the afternoon we arrived, for it rained most of the next four days (though luckily it was a fine afternoon to visit Sibelius).

From Sibelius Park we walked around the coast. There's a lot of coast and a lot of boats which the hunter-gatherer has to stop and look at. Imagine my delight as we find marina after marina. What is far more interesting is a rug washing station.

The Finn's tend to the pine floor with rugs style of interior design and wall to wall carpet is rare.  Rather than hire a rug cleaner, in Summer Finns gather up their rugs and eco friendly carpet shampoo and head to the beach.  Oh yeah, I kid you not. This is a very old tradition. We must've been too early in the season in mid June as the h-g had free rein on the wringer and there was only one rug hanging out.

But these photos I took in July 1980 show locals hard out rug scrubbing. It really is a thing. 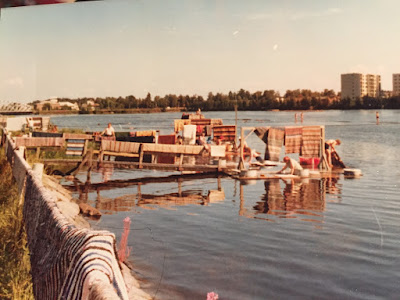 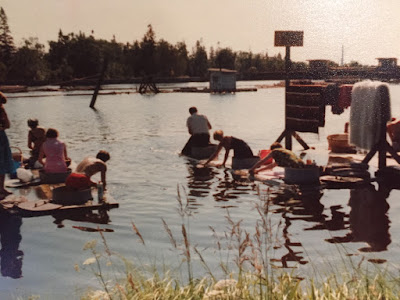 After an energetic day scrubbing there is nothing like good meal of reindeer.  And although we did no scrubbing, Rudolph wasn't safe from us. We went to a Lapp restaurant which we were assured served traditional food but was heavy on the tourist trap aspect (as the prices in Euro rather than Finnish marks would suggest) .

As long time readers of this blog know, I have a particular aversion to fruit and meat in combination so it will come as no surprise the menu below caused me some angst. Berries and berry sauce all over the place. 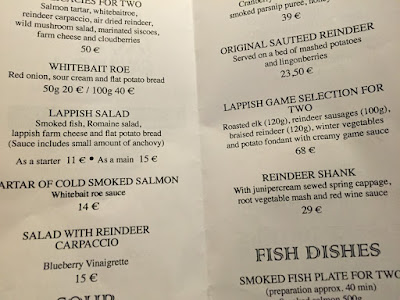 We settled on the Lappish Game Selection - roasted elk, reindeer sausage, and braised reindeer. Clearly a very meaty meal, but there was nothing special about either the food or the presentation. Being lean meat it is prone to dry out and that was the case. While the h-g liked them, I could have done without the berries on the side!

Our favourite food was found in the market that runs daily in the square by the harbour - more deep fried little fishes, rather less elegantly presented than the walnut crumbed smelt with gazpacho sauce we had in St Petersburg at the fancy restaurant, but just as delicious.


It's not just all this scrubbing and reindeer that makes the Finns one of the happiest countries, it's also the social policies. Although I am sure no-one is too thrilled about paying an average of 54% tax, I'm sure they are more excited about the generous health, education, pension, parental, child care, and annual leave provisions.  Total social protection expenditure relative to GDP is higher in Finland than any other country in the UE.

And so we move on, taking the overnight floating duty free store from Helsinki to Stockholm - but that's the next instalment.