If all the  hours we've spent following the Highway 61 Blues Trail through to the home of Country music were laid end to end, they would add up to the number of different Southern craft brewed IPAs we've drunk.  I would add that those hours have been exceptionally well spent and the IPAs very well drunk.  Though Amanda insists I note some IPAs are only wheat beer masquerading as IPA.

Without exception the museums are interesting, informative and absorbing.

At Sun Studio we had an enthusiastic Zac walking us through the history of the label and sharing rare musical gems, such as the first recorded rock and roll song - Rocket 88 by Jackie Brenston and his Delta Cats with Ike Turner on vocals - released in 1951.  Sun has other premises but the original studio is still functional, recording everyone from Elvis, Carl Perkins, Johnny Cash, Jerry Lee Lewis on through to U2, Def Leppard, Bennie Raitt and Ringo Starr.

Satellite records was established in 1959 and in 1961 became Stax, owned and run by the white brother and sister team of Jim Stewart and Estelle Axton. It's situated in what was, and still is, a largely black area of Memphis. Jim and Estelle saw no colour and welcomed all comers.

The label's house band was Booker T and the MGs (two white artists and two black) and Stax recorded what is essentially the history of rockabilly and country through rhythm and blues.  I mention race and colour as snippets of video show artists talking about there being no black and white at Stax, even though there was still a divide in the commumity.  Remember this before the any civil rights legislation.  After the assassination of Martin Luther King in Memphis on April 4th 1968, things changed, and many attribute the subsequent closure of Stax in 1974 to this event.

Aside from the huge range of music memorabilia (and history lessons!) the display includes Isaac Hayes' gold plated 1972 Cadillac, complete with fur lined interior, fridge and tv.  Who da man? Can you dig it?

For all the excellence of the museums, we are unanimous in voting the night at Red's Juke Joint in  Clarksdale the best night ever.  We had arrived in Clarksdale at the tail end of the annual Juke Joint festival (http://www.jukejointfestival.com/) which attracts Blues fans from all over the world.  Accommodation for 2019 is already booking out, though to be fair Clarksdale is tiny (pop 16,000) and there's not a lot of options.  So the Sunday night sees Red's host the Juke Joint Jam, where musicians in town come in, put their names down and jam the night away.

Red's is run down and has a down at heel charm; there's so much cigarette smoke and beer in the fabric of the walls it's like that's all that's holding it together.  Punters ($7 at the door) are jammed in, beer is $5 and the only choice, you grab a bit of space where you can, settle in and buckle up for the best music you've heard since Jim Hendrix and Eric Clapton hit the scene.  Standing there in his striped t-shirt, cap on, too young to drink, a 16 year old still with braces on his teeth blows the room apart. This is what we came for.

Memphis 3: Put some South in your mouth

Memphis 3: put some South in your mouth

Oh yeah, they're subtle down here.

While following the Blues highway is the big pull for this trip up the Mississippi the food is also a powerful attraction.  Crunchy pieces of fried chicken,  huge racks of ribs, biscuits and gravy, grits - what's not to like? Well, grits actually.  Not much to like about grits.  Coarsely ground maize kernels boiled with water or milk - as delicious as it sounds.

Driving the long, flat and extremely boring trip from Memphis to Nashville we take a break about halfway, turning off the freeway when we see a promising sign for a restaurant.  Bear in mind, promising very rarely delivers. Such as when we see a farmers' market sign proclaiming Peaches. Yum, we think. Uh uhh.  "Oh no ma'am, we don't have any peaches, that's just our sign".  We bought tomatoes, and they were delicious.

In Memphis they told us Gus's is the last word in fried chicken.  True, it was darn good and they turn it out by the coop load with creamy mashed potatoes and coleslaw.

Even better than the chicken? Our waitress Shalonda's false eyelashes.

So a restaurant in whoknowswhere Tennessee didn't make us very excited, but hey we needed a bathroom and it was past lunchtime.  It turns out Patty's in Wildersville might just be the best fried chicken in America.

We enter a place so clean and, gosh darn it, down home we couldn't help but order lunch.  $9.95 brought 4 pieces of crunchy crumbed juicy chicken, mashed potato and coleslaw the like of which the Colonel would turn in his bow tie for.  Chastity, our waitress, told us "I'm not gonna lie, it's the best fried chicken I ever ate, and I'm not just saying that 'cos I work here".  So we ordered it.

Ribs Memphis, and word is - Rendezvous has the best ribs.  They don't. And we're yet to find the best.    Barbecue  As Cleatus (yes) our Uber driver says "you caint beat barbecue and cold beer. No sir". Who are we to argue?   Martin's in Nashville had every right to be proud.  Whole hogs roasted every day,  four BBQ pits, 24 hours cooking time.  The sign says it all.
Posted by Happy Cook at 10:50 No comments:

Memphis 2: fun for the hunter-gatherer

Memphis 2: fun for the hunter-gatherer

The thought of a massive shopping centre isn't usually cause for the h-g's eyes to light up.  That is until we get to Memphis and he hears about Bass Pro Shops. This is 22 million cubic feet - you read that right - under one roof. 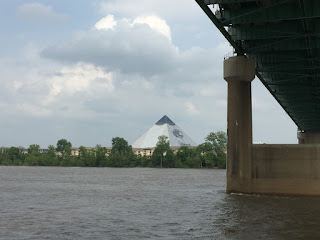 Luckily that roof is pointy as this is a pyramid and most of those cubic feet are thin air, but that still means two full floors of huntin', shootin', fishin' paraphernalia.  From a custom made $22,000 Beretta shotgun to a camo pattern easy chair, it's ALL here.  As you can imagine, I was weak with excitement at the prospect of the hours the h-g would spend looking at fishing tackle.

Amanda and I amused ourselves by engaging in conversation with a shop assistant (where y'all from?) who schooled us on US immigration  - "ya'lls lucky - in Noo Zealand they caint just walk over the border" - and international diplomacy and internal politics  "five years ago Putin said America would be four countries an' it's happenin'. I wish California would be it's own country - those rich people don't understand middle America and now they won't let him (the President) get on with the job".

We find light relief in the Beretta gallery "1 of only 7 in the world!".  Andrew, a lovely salesman opened the multiply locked gun cases and let us rack sidearms and crack shotguns. 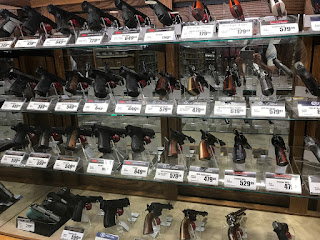 The h-g was still looking at fishing tackle so we calmed ourselves by going to the 84,000 gallon alligator pit, handily located next to the children's department. The alligators were doing what alligators do 99% of the time.  Exactly nothing. 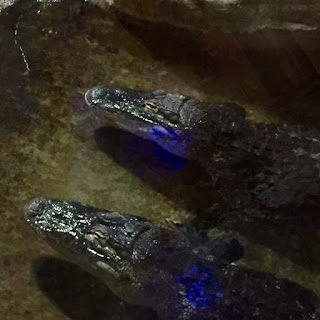 Once enough fishing flies had been examined and purchased we all rode the tallest free standing elevator in America to the top of the pyramid, 300 feet above Memphis and the Mississippi River.

Mercifully there was a bar to go along with the 360 degree views.
Posted by Happy Cook at 10:53 No comments: