While we weren't kidnapped in Stockholm we were captivated - another very cool Scandinavian city.


As with Helsinki, I was here 36 years ago and this time my 'wanna see again' pick is the warship the Vasa. The Vasa was built on the orders of King Gustavus II between 1626 and 1628. He had an expansionist strategy that included a war with Poland and the Vasa was to be the flagship.
However it turned out to be a good example of the Emperor's new clothes. The King, busy at war, kept sending the shipbuilders instructions that made the ship less stable - she carried two enclosed gundecks with brass cannons, had a high stern to allow for boarding other ships, and a narrow hull which couldn't carry enough ballast, all making the upper structure too heavy.

The shipbuilders didn't want to go against the King's instructions so no-one spoke up about the structural problems and the Vasa sank on her maiden voyage. About 1300 metres out from the dock a light breeze was enough to capsize her, and there she lay for the next 333 years. A good case study and more info here 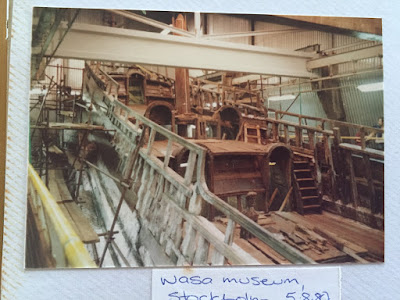 In 1961 she was recovered, largely intact, and housed in the Vasa Shipyard, where I saw her in 1980. For almost 20 years they had been spraying the ship with a preservative solution and I still remember the smell. There wasn't a lot to see at that time except for the ship itself and I was keen to see what progress had been made.

In 1988 the ship was moved to the very fabulous Vasa museum, where we saw her more or less fully restored.  Just the sight of the ship itself is breathtaking - she's a huge galleon and the restoration is meticulous.  It is easy to spend a half day at the museum, such are the excellent story boards, displays and detailed information on everything from the shipbuilders selection of the trees for the build, the intricate carving and paintings on the hull, through to the food and drink carried on board. Incidentally, along with my photos I found the entry ticket from 1980 - it cost 3SEK - Swedish Kroner - this year we paid 130SEK.
Also historical and almost as fascinating is a tour of Stockholm City Hall, the home of the Nobel award ceremonies. We find Blå hallen - the Blue Hall - where the awards dinner takes place, isn't blue (just as the Red Square isn't red); the Gyllene salen - the Golden Hall with its 18 million gold mosaic tiles is gold, and as ornate as any we have seen.  It is amazing that they cram 1300 guests into the dinner.  We are told there is a strict measure for the amount of room between each seat, and it seems there's barely enough room for the 210 wait staff to move. They must select them for their slim physiques!  If you would like to recreate the place setting for the Nobel dinner, you will need the specially designed dinner set.
Posted by Happy Cook at 18:33