What’s Québec if not Poutine?

It’s pronounced Putin, as in Vladimir.  And when they write about Vladimir in the media, it's written as Vladimir Poutine.

And for some inexplicable reason Québécois love it - poutine, not Putin. It originated here in the 1950s and the is dish part of their cultural heritage, which does make you wonder.

The basic components are three of the hunter-gatherer’s favourite things, so it could be appealing: fries, cheese, gravy.  Sadly, poutine layers these three things together. Traditionally it’s fries topped with cheese curds (squeaky cheese) and covered with brown gravy.  It looks just like it sounds.

As luck would have it, Poutineville -yes that is the name of the establishment- is on the ground floor of the building where I’m going to language school. I didn’t say it was good luck.

I give in and try it, to give an informed opinion if nothing else.  Poutinevillle only serves poutine, but in a bewildering number of combinations.

I switched it up by adding roasted peppers and bacon.  It didn't help. No matter how you look at it, putting gravy on fries is only going to make them soggy- what’s the point?


Fortunately there's more to Québec than poutine, such as great cities like Montreal and Québec City, and the chance to practise your French, though this is not French as you learned it at school, it's Québécois.

Among other things, Montreal is famous for Leonard Cohen and Schwartz's.  You are probably familiar with Leonard and the city is so proud of its son it has a massive mural to prove it.  I was in the Montreal Art Museum (fabulous) when I looked out the window and there it was - much larger than life, looming over the rooftops. 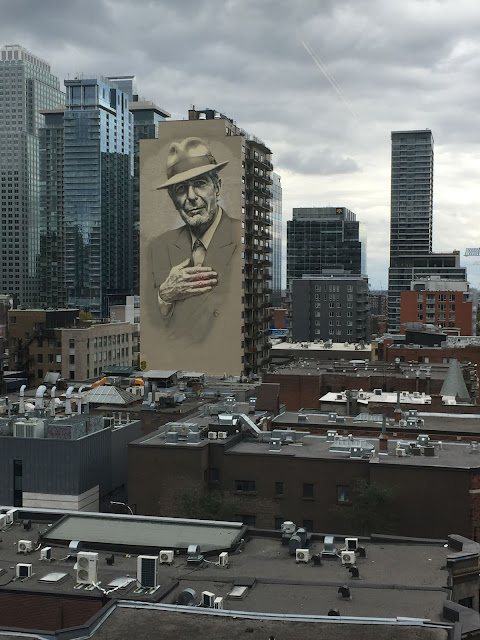 Now Schwartz's Deli is world (they say) famous as the home of smoked meat. The deli has been there since 1928 and they marinate the brisket in secret herbs and spices - sound familiar? - for 10 days before smoking it daily and adding no preservatives.  It seems it is extremely famous in North America.  I met people who were buying pounds of smoked brisket and flying home with it in their hand luggage - that cabin must smell amazing. 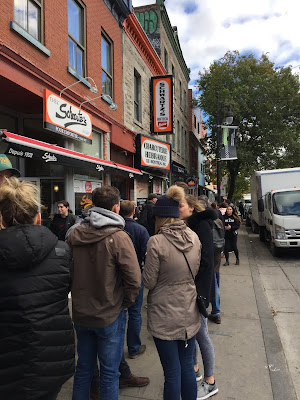 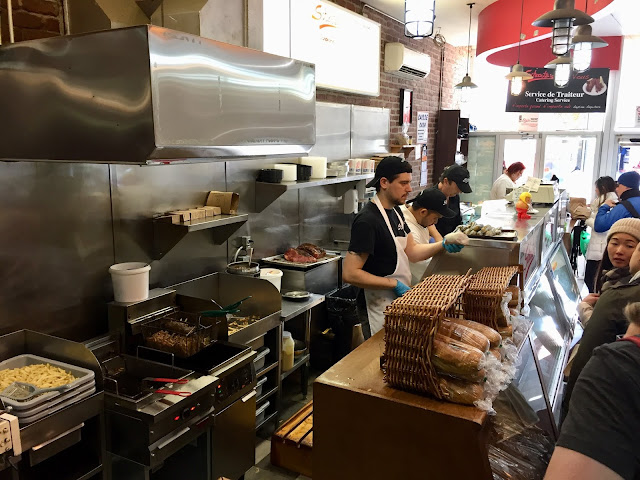 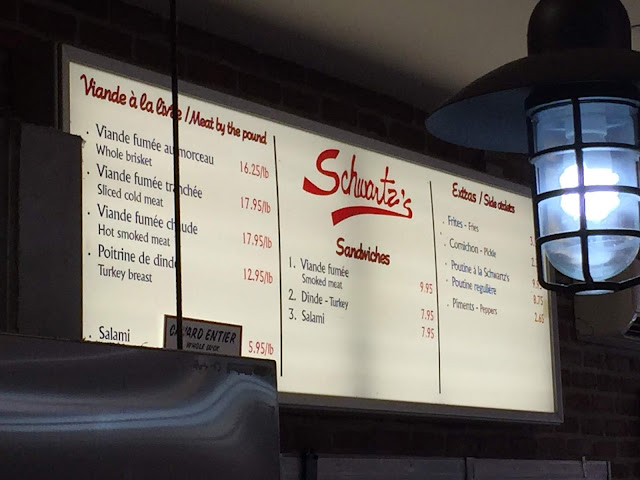 And was it worth the wait?  Depends on how much you like smoked meat I guess, but it was pretty tasty.  I'll tell you this much - it was a whole lot better poutine.

Fall in Canada - that's Autumn to us

Some of you will know the reason for my lack of blog posts while travelling in Canada and the States last October and November. For those who don't, it's a long story involving an iPad left at home,  Canadian Thanksgiving, inept courier services and a waste of money - enough said.

So, highlights of Eastern Canada.

You already know I went to the ice hockey in Toronto, a cool and very walkable city with a very high tower (for 32 years the highest in the world until the Burj Khalifa came along and spoilt it) and a very interesting shoe museum - you've gotta love a shoe museum.

At the top of the CN tower there's a glass floor which can hold 3.5 Orcas, though I struggle to see why they'd want to go up the tower. 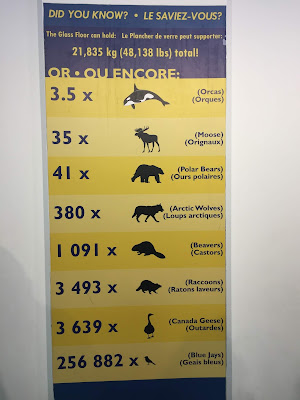 Or many, many selfie takers, some of whom must think they weigh more than 3.5 Orcas because they approach the glass so tentatively. 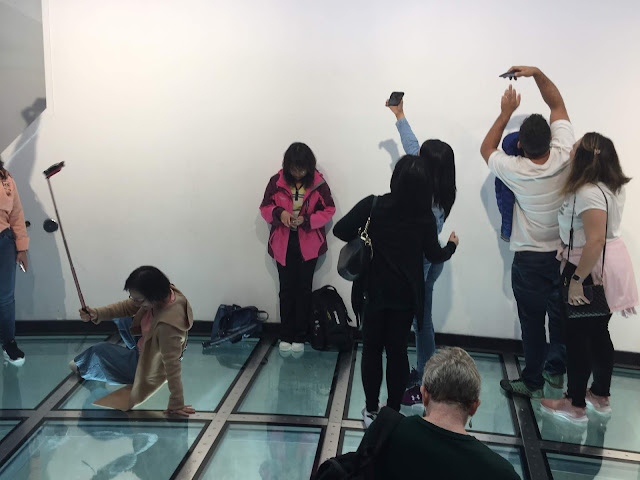 What else to do in Toronto?

The really great Art Gallery of Ontario, where I saw a beautiful photographic exhibition called Anthropocene, which according to the blurb, dramatically illustrates how we, individually and collectively, are leaving a human signature on our world. I can't recommend it highly enough if it tours near you - stunning photos of really ugly things.

You can also visit a fabulous castle, the Casa Loma, built by entrepreneur and man ahead of his time Sir Henry Pellatt in the early 1900s. Poor Sir Henry brought hydro electricity to Canada and thereby made his fortune, until a campaigning legislator took against tycoons like Henry and lobbied for electricity to be "free as air".  He was successful and this initiated the end of Henry's fortunes and pretty much drove him bankrupt.

Maybe he should have invented Bitcoin - I was in a coffee shop where you can trade Bitcoin while you have your coffee - yes, an ATM where you can buy and sell.  I just had coffee.

And the Bata shoe museum   - you don't want to miss this.  Thanks to Mrs. Bata there is a collection of 13,000 pairs of shoes - eat your heart out Imelda Marcos - spanning 4,500 years.  Even if you don't like shoes, the stories evident in design and materials show the changing lifestyles, cultures and customs across the world and through time. There's everything from ancient Greek sandals through to Manolo Blahniks.

Still in Ontario, I have a short stay in Kingston, at the eastern end of Lake Ontario at the beginning of the St Lawrence River .  As an historical note,  in 1841 Kingston was named the first capital of the United Province of Canada.  From a tourism perspective, it is better known as the departure for the Thousand Islands, really 1,864 islands that straddle the border between the US and Canada. The border tends to be an invisible line down the lake, so it would be darn hard to build a wall, if anyone wanted to.

I take a boat trip and the scenery is spectacular, especially as the colours of the leaves are changing. The islands range in size from a small rock, to those the size barely supporting a house, on up to 100 sq kms. To qualify as one of the Thousand islands, Wikipedia tells me,  it has to be at least  one sq foot of land above water all year round and support at least two living trees.

And so I leave Ontario and take the train to Montreal, Quebec.