Not the result we wanted in the Australian Derby, but a fun day at the races nonetheless.
We thought our boy was a good chance for a place, but as all of us know racing is a fickle game.  You can see on the tote board the eventual winner Tavago was at much higher odds, and the very hot favourite Tarzino came 4th.  However, it may be my fault What's the Story didn't do better. Apparently it is bad luck to take a photo of the horse before the race! LOL. If that were the case it would be a barren winner's circle as everyone is clicking away. 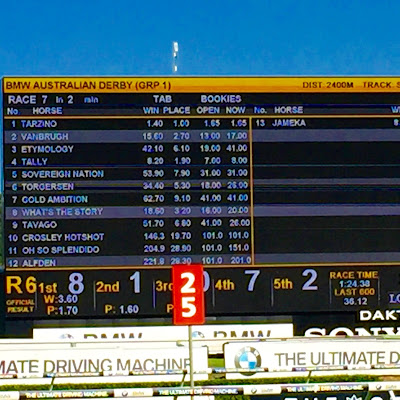 It had rained quite a bit in the week prior, and despite a 31 Celsius day on race day, the track didn't dry out sufficiently and was heavier than What's the Story likes. The jockey said the horse responded well when asked to sprint, but couldn't gain traction of the soft turf - when he has a firm track he's a sprinting demon, as we have seen earlier in the season.   Still, at 6th place in a very major race he ran well, won enough money to more or less cover the costs of getting him there, and ensured all of us owners who travelled over had a good day out.

It's difficult to find hats anywhere in New Zealand - generally it is wisps of fabric or lace known as fascinators.  To me these are not even interesting, let alone fascinating; I really wanted a hat. As I mentioned in the last blog, my millinery career isn't promising - the apricot number is languishing, naked and unloved.  So the search was on.

Having despaired of finding anything suitable  at home it came as a relief to find the shops in Sydney groaning with race day outfits - dresses, hats (and fascinators), shoes, accessories. The Autumn Carnival is a Big Deal.  I am not sure of the genesis of the tradition, but Derby days are traditionally a black and white theme, so all those lining up for Fashion in the Field are in various monochromatic combinations.
I was sort of on theme, and no, not an entrant in the race day fashion stakes!  A group of owners had bought tickets into one of the hospitality spaces known as Little Sydney. It turned out ours was catered by Matt Moran (whom some of you will know if you have watched Australian Masterchef in the past - he is often one of the judges).  Having paid a substantial amount for the tickets, it was "free" food and drink all day, and very delicious it was too.

So it is all over for What's the Story in his first season - not a bad debut year considering he has won about $140,000 for the year.  The plan now is to rest him til Spring then do a couple of races here and if all is well take him to Melbourne for the Spring.

If it's to be Melbourne Cup I'll need a really good hat!