It isn't that I haven't been going anywhere or doing anything, I just haven't written about it! And now I am writing about something unexpected and quite exciting, for me a least.

Some of you already know that in 2014 I bought a 10% share in a race horse. I had read about syndicated ownership in a magazine and found out more about it, speaking to management and asking lots of questions. It looked like fun and while I've always liked the races I've not been a regular attender of race meetings.  Time for a new hobby!

It was just after the yearling sales that year so there were lots of syndicate shares available. I'd like to say I extensively researched all the horses, but when I saw this horse's lineage, that was the choice made.  A Savabeel colt whose sire was Zabeel, whose sire was Sir Tristram.  Genes will out!

So I have 10% of What's the Story - excellent name especially for Oasis fans.

And he's been doing well - very well.  A win on debut in September 2015 drew an offer of $500,000. The syndicate (correctly) assumed if he was worth that then it could only get better. And it has.   He had a few lacklustre performances while he got used to racing and worked out what he was supposed to do - that is run and not spend all his time eyeing up the fillies.
So we got a good win and then a brilliant 2nd in the New Zealand Derby a couple of weeks ago (beaten by a very very short margin) after which we were offered $1.3 million. Which we didn't take.


It was an extremely exciting race and as owners we had rather mixed feelings when he was second by half a head. As the trainer said, you’d rather lose by a length than a nose.

If you want to relive the glory go here https://www.nzracing.co.nz/RaceInfo/44627/9/Race-Detail.aspx and about a third of the way down the page you’ll see a video tab. He is number 10, blue and white silks and white helmet. The last 200m is a nail biter. 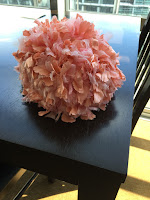 He is now entered in the $AUS2million stake Australian Derby run in Sydney on 2nd April. I hope he does well cos this new hobby is costing a fortune in travel, shoes and new frocks! Luckily I have friends who own hats I can borrow.

Or here's an attractive 60's number I bought at a second hand shop for $10, thinking I could repurpose it! I'm told it makes me look like my mother. So far I have taken all the apricot flowers off and that's all the progress I've made. My career as a milliner may be very short.


An Australian jockey has been lined up for the race - Blake Shinn. He has won multiple Group 1 races including the Melbourne Cup in 2008,  is 3rd in the NZW Metropolitan jockey premiership "league" riding 43 winners and $5 million in prize money so we hope he adds another couple to it!  He knows the course, how the other riders operate and is very experienced.

Answers to FAQs
I don't know exactly how many people are in the syndicate. For example, some couples own 10%; a father and son own 5% between them; some, like me, own a share on their own.

When he places and collects money, the trainer gets 10%, the jockey gets 5% then what's left is divided according to ownership percentage. Unless you are building a war chest to take the horse to bigger races offshore. For example, to take What's the Story to the Australian Derby is about $NZ25,000 in costs.

He is still a stallion (hence his interest in fillies). Stallions often have to be gelded as they get too stroppy or grow too heavy, but this doesn't seem to be the case. This is a bonus for the future, as if he gets injured his lineage and good racing form mean he will still be worth good money out to stud.

No, I actually didn't go into it for the money - that would be a very false hope! I went into it for fun and that's what I'm having. Winnings are a nice bonus - and if he does well in the Australian Derby, a very nice bonus!