You guessed it - soup! More soup than you can shake a ladle at in fact.
Ha! I hear you say, who can't make soup?  But there is so much more to a good soup than chucking stuff in a pot then giving it a whizz in the food processor and calling it done. 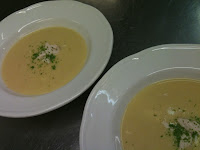 Cast your mind back to Week 3: Hot stock and several smokin' sauces.  Recall the lengthy process associated with making a good stock and start there for your soup.  None of your Campbell's tetrapak or hairy Pierre Marco White tear tab stock pot shortcuts - unless you are prepared to accept a less flavoursome result.  God knows how many litres of stock we use this week as we traverse the landscape that is soup: clear, unthickened, thickened, thickened by pureeing, by using a roux, adding liaisons or cream - the varieties are endless. We make:
The Consommé warrants considerable space.  It is essentially a clarified stock - the chicken explains the base of the stock and Célestine describes the garnish and style of presentation.  As you can imagine, there are very many permutations and combinations.  Warning - I'm now going to explain in some detail how to make a consommé, so skip over this part if you only read this blog for the class gossip - which apparently many of you do!


For our chicken consommé we squish (that is the technical term) together a mixture of chicken mince, egg whites and a mirepoix of celery, leek and carrot cut into brunoise (see week 2!) We add it to our cold stock, together with a bouquet garni and a brulée onion.  To create a brulée onion, cut it in half through the diameter and put the cut side down in a dry frypan and cook it until it is well charred, but not burnt.  I know  -  you are somewhat nonplussed at this stage aren't you?  What is the reason for all this bizarre kitchen behaviour to make a clear soup? - mince, eggs, burnt onion - it beggars belief.  However I assure you this is standard culinary procedure and there is a reason for everything.  Read on.
﻿The key to making a high quality consommé is simmering - an act which, in combination with frequent gentle stirring to keep solids off the bottom of the pot, brings impurities to the surface.  Eventually the proteins in the egg and meat coagulate and combine with the mirepoix to make a solidish layer - this is known as the 'raft'.  This raft is a filtering system, and as the stock gently bubbles through the raft, impurities are caught while the raft simultaneously intensifies the flavour of the consommé.  As it is all about clarification, you must not disturb or break the raft or you end up with cloudy consommé. We simmer for over an hour before VERY CAREFULLY using a ladle to extract the consommé from under the raft, then pass it through muslin before skimming any visible fat from the surface. The brulée onion has contributed a depth of colour to the liquid and so now our consommé is a very clear, dark amber coloured liquid, with an intense chicken flavour.
﻿﻿
During the week I achieve a perfect result. So what happens during assessment?  You know exactly what happens.  Well, you don't so I'm going to tell you.  Busy with something else, I fail to stir the consommé in the early stages and end up with  a very cloudy result.  This is not good, but it is what we used to call in the consulting business, a "teachable moment".  This is what I love about cooking - there is so often success to be wrenched from the jaws of disaster.  I take the cloudy consomme, cool it right down to cold, whip 3 more egg whites through it, bring it back to the boil then gently simmer til the egg whites do their thing. The following photos show the process.
﻿﻿﻿
﻿
﻿﻿﻿﻿﻿﻿﻿
﻿

﻿﻿ ﻿﻿﻿﻿﻿How fabulous is that!  It seriously is magic or at the very least, chemistry.
No, those aren't snakes - they are thinly cut julienne of herbed crepe - that's the Célestine part.
This week the Wrighthaus has been on the receiving end of a variety of soups - the young missus has a broken foot, the young mister is flat out at their busy café,  and GG has come home from her glamorous expat life to run round after the kids while broken foot girl recovers.  Fortunately they all like soup!
For assessment this week we also present the Red Lentil Purée garnished with croutons, and Chicken Velouté garnished with poached chicken. This latter is also known as "Holy shit! That chicken soup is delicious"  by broken foot girl.

So that's probably enough about soup.  I know I've had enough to last me a while - it's a shame the timing of this lesson doesn't fall in winter!

Not much class goss this week.  Our core class, Novotel, is down to 11 by my count.  I think the roll call on day one was 17, two never turned up at all, and we've lost four.  Jiggly seems to have dropped out as I indicated in an earlier post, though who knows. He is either awaiting sentencing or didn't get sent down as a couple of people said they have seen him around the Hutt. Dumber has definitely dropped out and is cooking (!??) in a pub in Stokes Valley - say no more.   Our tutor Trevor, who is part time, has the summer off so over the next weeks we have a variety of tutors which, I think, will be a good thing as we see different styles and standards.


On assessment day I share the bench with Dumb - who is quite sweet really, and becoming not-so-dumb as time moves on and he is free of the influence of Dumber - and the donut eater from Kenya.  At the end of class I have no dishes as I have been washing up and cleaning as I go - just like my mother taught me. Here is a picture of the bench MORE THAN HALF WAY through their clean up. Where were their mothers???? 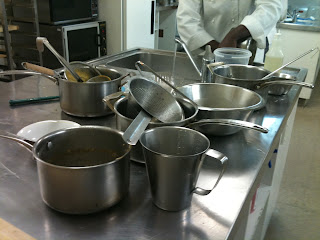