The landscape changes very little unless it's the size colour and number of termite mounds.  The bush is sparse and at times the roadside is charred where planned burn-offs have taken place.  Our new travel game, one point for any feature we haven't seen before, fails to get lift off.

Our singular excitement is driving through a roadside fire just before Halls Creek - no photos as the h-g didn't have a camera ready and I wasn't about to stop in the middle of a raging conflagration no matter how loud he shouted - I wasn't keen to be roasted alive, nor would blistered paint work in our favour when returning the rental car. The police closed the road shortly after we went through.

Halls Creek is fascinating in its nothingness - and that it's the only town for 600kms.  As with all these small settlements in the middle of nowhere it's a sad place. There are few shops, any there are have shutters or wire gates protecting them from break-ins after hours, there's usually two or three big petrol stations, a caravan park/camp ground or two, and a reasonably large supermarket to service travellers and anyone living within several hundred kilometres.

We'd been told about the China Wall just out of town so made that pilgrimage.  Despite looking as if a talented stonemason had had a flight of fancy in the wilderness, it's a natural white quartz wall rising out of the limestone, which must have eroded around it.  It runs 15 kms into nowhere.

There's not much to engage us on the road from Halls Creek through Fitzroy Crossing to Derby then on to Broome.  The detour to Derby takes us to a sensationally large 1500 year old boab tree.  As they age the trees hollow out in the middle, and just out of Derby there's the Prison Tree - now, various stories abound as to whether this was a holding place for aboriginal prisoners, or a staging place for those engaged in trafficking aboriginal slave labour.  As I've researched a bit more about it, it seems these stories are myths and the tree was never used as a lock up.  However it's a handy history for the town to promulgate as there's not much else to recommend Derby.  More about the tree's history here if you are interested.


It is clear there's social problems in the Northern Territory and Western Australia. Alcohol abuse, and the violence, crime, and social disenfranchisement that accompanies it, is visible in every town.  In every small town shop windows are barred and security gates locked after closing.

Rules abound for how you can buy and consume alcohol - a set of rules applied after the proverbial horse had bolted. In bars we couldn't buy a double shot of anything. In bottle stores, if you want two bottles of wine, there must be two people with ID to make the purchase.  At a drive through bottle store (yes, there is irony at every turn) it's a "no car, no service" policy, ostensibly to prevent walk-ins (code for aboriginals) purchasing alcohol. 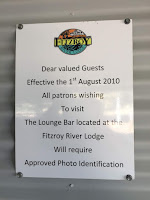 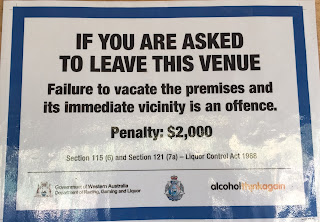 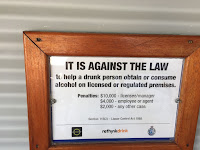 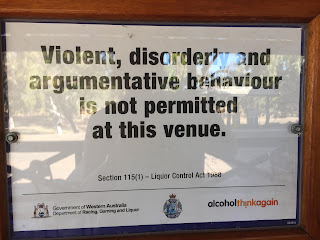 It seems that for every Aborigine owned or co-owned business we see on this trip, such as cafes, Art Galleries, River trips, and other tourism ventures, there’s a greater number of very black people sitting in groups under trees, lounging outside supermarkets or sitting in bars with cans of beer.

In Darwin we waited for the bottle store to open at 10.00am to get some beers for that night after our drive. The only person who beat us through the door was an aboriginal woman buying a bottle of rum and two litres of coke.

At Fitzroy Crossing, about 500kms east of Broome, we detour to check out the Fitzroy Crossing Inn, said to be the oldest in the Kimberleys.  We anticipate a charming old homestead with a shady garden bar where we’d enjoy lunch and an ale or two. We find a concrete block reeking of urine and disinfectant; we’re the only white people there aside from the barman, a traveller from South America.  About 15 to 20 Aboriginal people sit with cans of beer looking like they’d been there since opening and wouldn’t be leaving any time soon. They ignore us. The atmosphere seeps lethargy.

We’ve met French, Estonian, Chilean, Argentinian, Welsh and a host of others working here through the dry season. They work in camp grounds, coffee shops, restaurants, anywhere there’s a service role. At the supermarket in Kununurra there was one Aboriginal woman on checkout. It seems unless they start their own businesses, there’s no employment for them.

Do they not want to work? Or do businesses not want to employ them? Anyone I ask says it’s a combination of both. I’m told that if an aboriginal wants a job they get it and the Government pays, or at least subsidises. I don’t know if this is true.  Given it wasn't until 1962 indigenous Australians got the right to vote in Federal elections, and it took a referendum in 1967 to include Aboriginal Australians in determinations of population", there's a lot of catching up to do.

I promise the next, and final, Darwin to Broome instalment will be more uplifting!