Australia - Darwin to Broome: Part One

It's the 19th February 1942, I'm on the wing of a Kittyhawk being strafed by Japanese Zeros -  I’m hit - now under parachute witnessing the destruction of the harbour beneath me.  Now I’m on the deck of a destroyer at the wharf and loading supplies when a bombing run blows out the deck beneath me and I’m swimming in the burning sea.

This VR experience is part of an excellent exhibition at Stokes Hill Wharf that includes interactive storytelling, a full size replica of a Zero, and a slightly weird hologram experience where the Commanding Officer of the USS William B Preston relays his experience of the bombing of Darwin.  (More on WW2 and the Northern Territory in a future episode)

But that is only one half of the stories told here.  The other side of the facility is a brilliant history of the development and growth of the Royal Flying Doctor Service established in 1939.  Another hero another hologram, this time John Flynn tells how he came to found the Service.

I don’t know why I’m surprised Darwin has great museums, but I am, and I’m even more surprised at how much I enjoy them.  Modern and well curated they tell lively stories about the Northern Territory of Australia.

Want to know what it’s like to survive a force 5 cyclone when it hits dead on? People in Darwin found out on Christmas Eve 1974. You can get some idea at the Northern Territory Museum and Art Gallery. The Cyclone Tracy exhibit has before and after photos of parts of the city to show the devastation, which pretty much did away with the whole town.  Chilling news recordings from the day and night the cyclone hit send shivers down your spine -  “Christmas Eve will be dirty words in Darwin for a long time”.  That probably scared kids more than the cyclone.

In a pitch black room you can hear a recording of the howling storm that’ll make your bowels turn to water.  It’s not hard to imagine being crouched in the pitch dark while the roof comes off and corrugated iron screeches across concrete and wind roars ceaselessly for hours and hours, not knowing how or when it will end. A bit like living in Trump's America I guess.

Everything in the Northern Territory is designed to kill you. The weather, crocodiles, snakes, spiders, water buffalo, jellyfish - the box jellyfish has a sting that’ll kill you in 2-3 minutes. 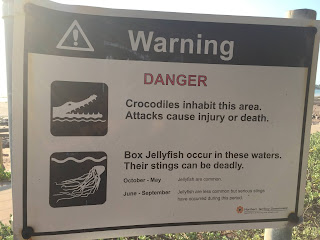 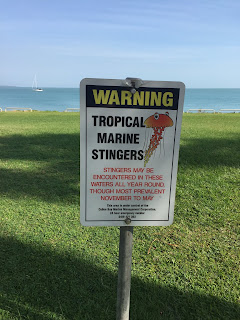 Our river trip on the South Alligator  took us up to Cahill's Crossing, a remote river ford that crosses into Arnhem Land.  The tides at the Top End reach highs of 11.8 metres, so there's LOTS of water rushing up stream as the tide comes in, and just as much rushing out when the tide goes out.  This creates the perfect conditions for idiocy and bravado as vehicles cross in unsuitable circumstances and frequently get washed into the croc infested waters.  You'll find a  good summary of the crossing at https://www.youtube.com/watch?v=8ojzUCDR6lg but to see Darwinism at work, google Cahill's Crossing on youtube - but beware of going down a rabbit hole.

But wait. There’s more. That was just the salt water crocs. There’s also freshies that live inland in the rivers and lakes.

The stunning Katherine Gorge is, in the Dry, a series of short rivers and gorge pools - in the Wet season it’s one massive raging torrent.  We take a boat trip up through the three lower gorges, walking across the rocks between each and changing to another boat each time.

While we don’t see them, we know crocs are about.  So guess what we do - we go for a swim. The pools between a couple of the river stretches are croc free (they tell us) and so we enjoy a cool break from the 33 degree heat.

Aside from trips up the Gorge, which is very beautiful, and other natural phenomena, Katherine as a town has very little to recommend it.  It's a crossroads for the Great Northern Highway west which are taking, and the road south through the centre to Alice Springs and on to South Australia.  Lots of tourists, trucks and Road Trains - not trains at all but trucks pulling 3 or 4 trailers - passing through, so lots of gas stations and fast food joints.

There's nothing to keep us here and we steel ourselves for the long boring 500 or so km drive to Kununurra and into Western Australia. We've already worked out any game of eye spy fizzles out pretty quickly when there's nothing but road, trees and termite mounds to see.