The Bridge to Somewhere

We came to Malmo on the south west coast of Sweden partly because of a Nordic Noir TV programme we'd stumbled across called The Bridge. The Oresund bridge links Sweden and Denmark and in the first episode a body is found severed at the waist, half on the Danish side and half on the Swedish side. Gruesome, but we were hooked. 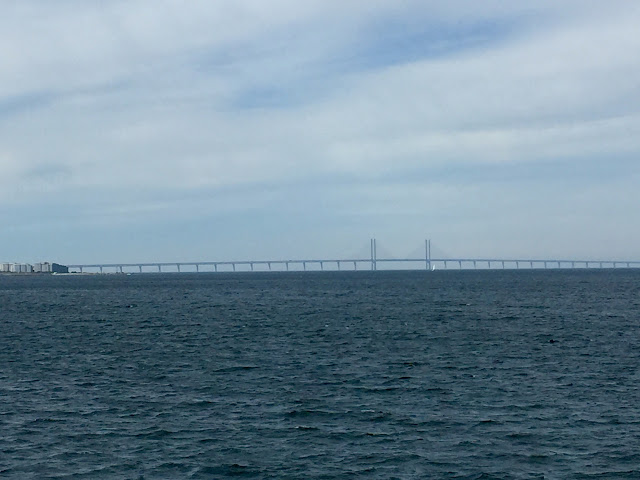 The Bridge is not just a bridge. It is a bridge running 8 kilometres from the Swedish coast to an artificial island in the middle of the Oresund Strait, then it becomes the 4km Drogden tunnel emerging in Denmark. This whole feat of engineering magnificence deserves that overused term awesome. Much more dramatic photos can be found here.
Our walk to view the structure takes us past the redundant ship building yards and warehouses that housed long defunct businesses. The buildings have either been transformed into IT or biotech centres and apartments, or demolished to make way for new build developments, open spaces, lovely parks, cycle and walkways, and providing water access.

Malmo has surprised us. It seems to merge old and new quite successfully.  We started the day with breakfast at the hotel, eating in what was a cellar built in 1307, nearly 500 years before James Cook came to New Zealand. The hotel has been here in some form since 1519. 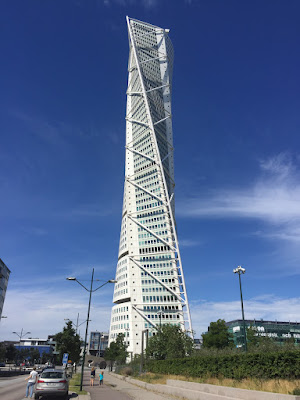 In contrast, the Turning Torso (2005) by Spanish architect Santiago Calatrava is the second highest residential building in Europe. It defies belief, stretching 190 metres up and twisting 90 degrees from base to top. I have to include three photos so you can appreciate the different aspects it presents as you move around. 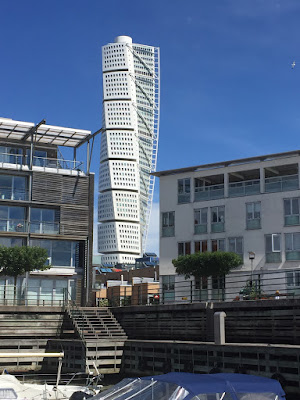 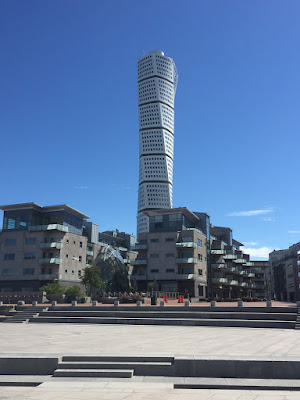 The Bridge opened in 2000 and changed the face, and future, of Malmo. It links the city to Europe's motor and rail network through Copenhagen.  Ten thousand Danes now live here (pop 300,000) and commute as taxes are lower in Denmark and rents are cheaper on Malmo.

Half the multiethnic population is under 35, which becomes evident when we go to dinner at the highly rated and evocatively named Bastard. 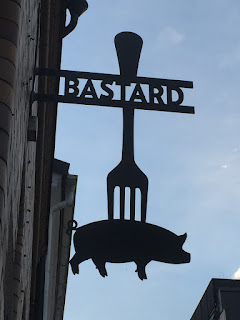 On midsummer eve it is pulsing and they're turning people away. Earlier in the day we wormed our way into the affections of the maitre d and he told us he'd find a table if we came about 8:30. He did. They serve tapas style sharing plates and we enjoy the best meal we've had all trip: anchovies on sourdough that's been toasted in the wood fired oven, cod roe with crisp radishes, salad greens, veal tongue (braised and made into a patty crumbed and deep fried) served with a salsa verde, and slow cooked rolled pork belly.

When we finally take the train to Copenhagen and cross The Bridge, it's an anticlimax. Much better seen from a distance or from the air.

Fortunately there were no severed bodies.
Posted by Happy Cook at 05:38