Rough and ready on the Pacific edge 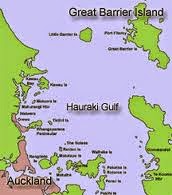 or simply the Barrier is a perfectly named landmass, sitting as it does between the vast Pacific Ocean and ’s  craggy landscape initially formed by volcanic activity millions of years ago is further shaped by the ocean and weather - and the people are similarly rough and ready.

On an overcast and slightly breezy day we leave our boat on anchor and go ashore at Port Fitzroy.  We see a rental car and call the number printed on its door.  No problem.  But he's not sure “what state the car’s in” and it’ll take a half hour for him to come over to us, driving from a neighbouring bay.  He duly rolls up, cites a price of $85 a day but if we don’t want him to wash the car  "call it $80".   We call it $80.  I point out the vehicle has no registration (“yeah, I renewed it on-line and I’m waiting for it to come in the post”) and no warrant of fitness (“yeah, it has to go over to the only garage on the other side of the island and it’s booked in tomorrow”).  This has a Tui billboard feel about it, but we're in the equivalent of Mexico here, so hand over the cash.  As we head off he heads to the general store and emerges minutes later with a slab of beer.

At 90 kilometres north-east of , the island is not that remote yet only 800 people live here year round.  By necessity everyone generates their own electricity through solar or using generators, and access to what most of us consider daily necessities is limited or non existent.

The west coast is a mass of native-bush covered ranges plunging into the sea, nicked by bays and dotted with bony islands.  Port Fitzroy is the result of a drowned valley system and forms a protected bay.  The settlement there is tiny, comprising a wharf, an info centre that rivals a phone box in size, and a general store selling various necessities including bait and the aforementioned booze. Half gallon flagons of sherry seem to be popular items.

In contrast the east coast is exposed to the expanse of the South Pacific – next stop . This coast is varied, with wetlands in the north and graceful curves of white sand beaches showcasing good surf along the waist of the island, then more rocky coves to the south. Between the two coasts the land is steep and brutal and covered in dense bush, yet over the centuries whalers, miners and loggers have had at it.

The island has a number of  Department of Conservation (DOC) walks/hikes, some more rugged than others. The 25 km Aotea Track is a manageable 2-3 day circuit for a reasonably fit person, and includes the ascent of Mt Hobson, at 621 metres the highest point on the island. You can count on plenty of up and down terrain, stunning views, interesting historic sites and beautiful native bush, including the surviving kauri trees.  The island is free from predators such as possums, goats and deer, so the bush has regenerated well. However the presence of rats means the native bird life has not fared as well.

We spend our first few days around the various bays of Port Fitzroy; not just for the cheap sherry -  there are many very sheltered anchorages with access on to some beautiful tracks through the native bush. Although it is the very end of April and we are well into Autumn, the weather is still warm.

We hike up the Kaiaraara track towards Mt Hobson; our destination is the old kauri dam about two hours up.  The  DOC tracks are well constructed and maintained, so the hike up is only moderately taxing; parts of the track are very steep and there are lots of series of steps to take you to the next section.  While you appreciate these early on, the sight of another flight becomes less joyous as time goes on.


The kauri forests were logged heavily between the 1880s and 1930s and the dam was one in a linked series used to transport the logs down to the bay.  The dam is a feat of clever engineering built by men with no formal training who just figured out what would work.  An estimated seven million feet of timber were logged out and sent down the dams.  Not without cost – John Mowbray in the New Zealand Observer in 1931 wrote “I saw what had happened to the Kaiaraara stream. The banks of the stream had been torn and mutilated. Its bed was four of five times its former width…The defacement of that valley was complete”.

The valley has regenerated to a large extent but of course the magnificent kauri don't grow back overnight.

Great Barrier is, in a practical sense, quite accessible with daily flights (30 minutes) from Auckland, ferry service (4.5 hours) operating every day in Summer and three times a week in Winter.  However it feels very remote and is a little like a step back to a simpler life - rough and ready is exactly the right way to be.