How to have a hangi in the Jordanian desert

As a New Zealander I am familiar with the notion of cooking food in an earth oven known as a hangi: this is a traditional Maori way of cooking, however not one undertaken on a daily basis these days.  It is usually reserved for special events - so special I can't remember the last time I had one.

The short version of a very long process is: dig a pit, light a fire in the bottom of the pit, pile rocks on the fire, when the fire burns down and the rocks are hot splash in a bit of water, put in baskets of the food to be cooked, more water to create steam, cover with cloths/sacks then mound up the soil.  and wait 3-4 hours. 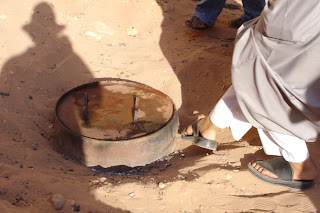 In other areas of the Pacific there are similar methods of cooking, but I am rather surprised to find myself in the desert of the Middle East watching a Bedouin tribesman lay down what is essentially a hangi.  In sand.

The difference is it is set in a metal container, kind of like a big, deep Dutch Oven,  which speeds up the cooking time considerably. 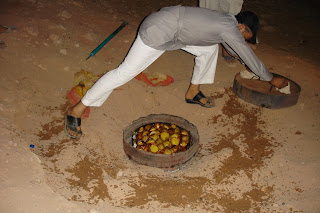 Oh, and it tastes waaaaayyyyy better!  Sensational in fact: the chicken is tender and juicy, the lamb falls off the bone. There is none of the damp earth/sack taste you sometimes get in a hangi, as both the sealed container and the sand (as opposed to earth) prevent that.

The accompaniments include all the usual suspects that comprise a delicious mezze.


Mezze is a selection of small dishes served either before or with a meal, and served at any meal including breakfast.  There are variations across the Middle East, Greece and Turkey but throughout Jordan we consistently find hummus; eggplant in a dip (babaghanoush) or as a salad; tabbouleh; labne - strained thick yoghurt; a hot pepper dip or relish; olives; Arabic salad - cucumber, tomato, onion, mint, lemon and olive oil; and of course flat breads such as pita or markook.

The flat breads are always freshly baked and delicious.  In the desert a Bedouin woman who could be 16 or 60 - even her eyes are barely visible - makes us glorious markook.
This is a very large, very thin bread baked on a convex metal plate called a saj, something like an upturned wok.  I have no idea how she gets it so thin simply by hand stretching.  if it were me it would be uneven and full of holes - a character bread!  I won't even try this at home - though I'm sure the hunter gatherer would be keen to cut a 44 gallon drum in half and build a fire!
Posted by Happy Cook at 08:15