What to do with giant zucchini and other helpful info

I should have known better than to plant more than one zucchini plant: it is still early in the season and already they overwhelm me.  As I warned in the previous blog, it wouldn't be long before I'd be making Zucchini Pickle.  At the time that was an idle threat as I am not a huge fan of it.  At least that was until I had a text from the glamorous doctor asking "for the recipe for the tomato/courgette chilli sauce/chutney/preserve (not sure what to call it)"  which she assures me "is absolutely brilliant on toast with an egg for a rapid breakfast that's good for me".  I had given her a jar of last year's effort a month or so ago and clearly it is better than I thought.  Of course the problem arises in finding which book I took the recipe  from.

The solution comes in the form of a terrific website for those of us who own more cookbooks than is sane or even manageable. www.eatyourbooks.com is a recipe indexing website that allows you to create a virtual library of all your cookbooks, magazines, and on line recipes. So when you start wondering, "now, in which  of my 120 cookbooks  / 500 magazines / xty online sites was that recipe for slow cooked lamb shanks with five spice that everyone raved about?" you can search your eatyourbooks library shelf and find which book it is in along with the page reference.  Genius.  Of course, unless you are anal enough to have organised your cookbooks by some clever cooking facsimile of the Dewey system you still have to find said book on your over-stuffed shelves.

This recipe came from Digby :Law's Pickle and Chutney Cookbook. this is a great book to use at this time of year when your (or someone else's) garden is offering up more fruit and vegetables than you can hope to eat in the immediate future. 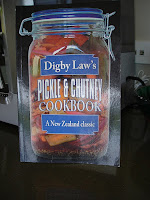 This is the recipe for Ratatouille Chutney, though as my eggplant haven't matured yet I used double the quantity of - you guessed it - zucchini!

Place everything except the vinegar and sugar in a very large saucepan and heat gently, stirring occasionally until the juices run from the vegetables, then bring to the boil. Lower heat, cover and simmer for about an hour til the veges are soft but hold some shape and most of the liquid has evaporated. Add the vinegar and sugar and cook another hour until the chutney is thick.
pour into hot clean jars and seal. Leave for a couple of months before using .

Proud to say I grew everything (except the vinegar and sugar!) in my garden.


P.S  this looks like an advertorial blog but I assure you, no-one is paying me -  I am however, open to offers!!