Week whatever: OMG! Where did the time go?

It is now two weeks since the final week of school and I haven't been good about writing up that last week.  Largely because there isn't much to say, though I am mindful I promised a gossip update.   The week consists solely of revision by way of practising tests, and going over topics that anyone wants to review. Of all people I am probably least in need, especially as I will not sit my final exam with the rest of my classmates in June.  As I will be in Europe then I will do my finals in November with the class that started after ours.


I'm just back from an eating excursion to Melbourne.  Among others, I love Mo Vida, a tapas bar just over the road from Federation Square.  With a glass of fino sherry I enjoy Quail with blood sausage; Croquettas de choco en su tint - squid ink with cuttle fish ribbon; and Boqueros, the most divine white anchovies with caperberries and parsley. It sounds like a lot, but it is all bite size and just perfect. 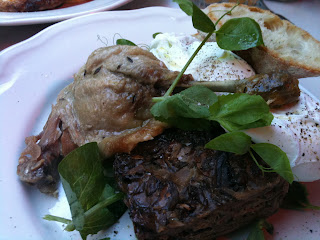 I meet  the banker niece for brunch - there are three banker nieces as it happens, but only one living in Melbourne. We meet down town in Hardware Lane at trendy The Hardware Sociéte.  Great menu beyond the usual brunch fare of Eggs Benedict blah blah blah.  I order poached eggs with duck confit and mushroom galette - magnificent!   And ridiculously cheap - can't remember exactly what it cost, but this labour intensive dish which tastes delicious is less than $20.

An ex-colleague who also now lives in Melbourne, and I share another delicious tapas type meal  at Señoritas. Great food in small portions so you get to try a range of things. The cactus taco was tasty!  I  like the decor which is very  Day of the Dead. The tiles in the loos were unique, to say the least. The light shades are made to evoke the image of Mexican dresses. 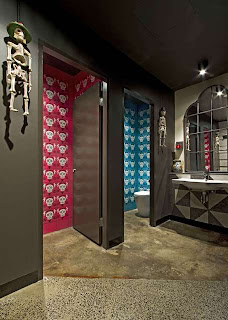 So, eating aside,  what has everyone been up to?  Most people seem to have completed their work experience in low key kind of sad cafe joints, or in pubs where their talents for deep frying are fully developed and appreciated.  Only a few make the effort to find large hotel kitchen placements or good restaurants in which to develop their skills.  Chatty girl  worked in the pastry section of a hotel kitchen but says she spent all her time making muffins and biscuits.  No-one had dramatic or overly exciting experiences to recount, so no dramas.


The only one close to drama involves one of the older guys from another group. Big Boy is a real kitchen know it all, as in "I've been working in restaurants all my life......" and on and on. He drives his cohort mad along with our group when we are together for theory classes.  No matter what the topic or the experience the tutor relates, Big Boy has to argue or "add" his knowledge or generally just annoy the rest of the class. As soon as he opens his mouth there is a collective sigh around the room.  So I am keen to hear how his work experience panned out.  Predictably, not well.  It is an indicator of his incredible lack of personal insight that he tells me that, after the first couple of days, the chef asked him if he had a learning difficulty or was just plain stupid!  Clearly the chef didn't appreciate Big Boy's superior skill and knowledge.


However the main drama occurs earlier in the year, when Jiggly guy, on one of his attempts to go straight and rejoin class, rips off one of the others. You may recall in a very early blog I mention we have a guy who appears mildly autistic.  In fact he should never have been admitted to the course as he has to have a learning support person with him all the time. The story runs that the two of them go out drinking on night.  Being highly open to suggestion, easily led and lacking any kind of understanding of nuance - or let's face it, any understanding of blatantly obvious social interaction - the poor guy takes Jiggly back to his flat.  Jiggly was fixing up (and I don't mean the decor) when our guy left the room.  When he returns Jiggly has disappeared - along with the guy's laptop and phone.


Tongue stud girl is heartbroken as her most recent boyfriend (the love of her life you understand, as it can only be at 17) went to Australia on holiday, came back  with tell tale signs of another woman on his person, and is now moving across the ditch.  Cue tears and recriminations.  All in all, not much excitement really. Dumb matured a bit over the nine months but still has no plans beyond mountain biking.  Dumber hasn't been seen for several months, though rumour has it he was working in a pub for a while.  Our Kenyan lad has enrolled to continue and do the hospitality management degree which he will do well in.  Pony tail guy is enrolling in the follow on Patisserie course as are several others.


So school ends not with a bang but a whimper.  Thanks to those of you who loyally read on, and especially for your comments and emails.  It is good to know someone is out there reading my musings. The hunter gatherer and I head off to Rome in a couple of weeks and I plan to food blog our trip so don't cancel your email feed just yet!
Posted by Happy Cook at 17:33