Week 18: We are now Diploma students

Last week was the final week of the Certificate in Food Preparation and this week heralds the commencement of the Diploma of Culinary Art.  Not that anyone really notices the transition.  The main exams are at the end of the overall programme, however I sit my Certificate exam on Monday as I am likely to be overseas next June when the exams are held - it's complicated - the course finishes in April but English timetable, English rules.  Anyway, the exam is 100 multi choice questions, most of which are as straightforward as you'd expect.  Two and a half hours are permitted (!) and I finish in 30 mins, but no-one is allowed to leave the room until an hour has passed. Rules, rules, rules.

While I am sitting my exam my Novotel buddies are being instructed in the fine art of service, or perhaps that should be Service. Two half days of instruction and practising polishing cutlery, setting the table, serving and clearing, taking orders and pouring wine.  The exam doesn't mean I escape Monday's lesson, and I spend the afternoon with the Ibis group and then Tuesday back with my homies.
﻿﻿﻿﻿﻿﻿﻿﻿﻿﻿

Questions / comments of classmates over this time:

So that is the first two days of the week. Wednesday, half of us cook dinner service and the other half serve in the restaurant - on Thursday we switch.  I cook Wednesday and serve Thursday.  The hunter gatherer books a table for six and is accompanied by the doctor, the civil servant and the mammographer, and the banker and the accountant.  Ponytail guy's partner, the station mistress, comes alone so joins the table which Ponytail serves.  We have a fairly full restaurant and although down one in the kitchen and two in the restaurant, there are no disasters so consider the night a success. My friends are fulsome in their praise of the food and service - it is nice they are so supportive.
﻿﻿
Thursday, the restaurant is at capacity (40) plus a few and the kitchen is down two - more on that later. The kitchen crew do an amazing job and our Thursday tutor (who also does our assessments) runs things smoothly and sends out gorgeous looking food. We are so busy both nights I fail to take photos.
﻿﻿
So where were the missing persons?  Dumber didn't turn up all week.  Jiggly came Monday and hasn't been seen since.  When I spoke to him that day he said he was "in a power of shit" and was likely to be up on an assault charge from the weekend's activities.  There has been a bit of a backward slide for a few weeks now and old "friends" have been visiting from out of town.  I think he finds it hard to stay on track when faced with these sorts of people and it looks like evil has triumphed over efforts to reform - pretty sure he is back on hard core drugs.  It will be interesting to see if he turns up this next week.  I have another revelatory moment this week when chatting to one of the Ibis guys. I ask what kept him this morning as he'd arrived a bit late. He tells me he had to get his jewellery adjusted - this turns out to be an ankle bracelet and it looks like this
not this
He has a curfew between 10pm and 7am to allow him to come to class.  I tell you, I am living in another world.
After last week's posting I was soundly told off for what was deemed to be a denigration of the Prawn Cocktail as "fuddy duddy".   I am reliably informed they have been given a modern twist in some dining establishments. I am prepared to wax lyrical on the new style Prawn Cocktail as soon as I see and eat one, as I do love prawns.  Google has LOTS of images, but I like this one the best!  I would hazard a guess that it is from an American menu.
Was this what you had in mind, gentle reader? 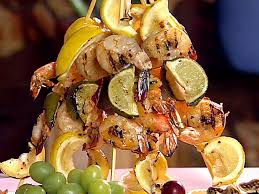