Heightened awareness is an interesting phenomenon: after last week's Food Safety  I am excessively (or not) sensitive to food preparation and storage. For example, today there is an extension to the local Farmers' Market with a mini ethnic food festival in the nearby square. I am unable to order any food as my mind is full of concerns. How long has that been sitting there? What temperature is that bain marie? Arrrggghhh - pre-cooked rice, home of bacillus cereus. OK, you are wearing gloves, but what else have you touched with them, including money? It's not called filthy lucre for nothing! Finally I have a cup of coffee and come home and prepare my own food. Hygienically.

This week we complete our First Aid certificates, so that old heightened awareness thing sees me on the alert of potential heart attack victims or ready to assist at highway accidents. Fortunately no-one appears to need my help. Jiggly guy comes across a woman who has been knocked off her bike by a car when he is on the way home from class, and assists by employing the letter D. We learn many useful acronyms over the two days, the first of these being DRS ABC. The letter D is for Danger, i.e. remove current, or avert further, danger. Jiggly assists by stopping traffic around the accident.
FYI
R is for a response - are they responding to voice, touch?
S - send for help!
A - is their airway clear? Tilt the head back. No, it doesn't matter if they might have a broken neck! Being paralysed is the least of their worries if they can't breathe. Though personally, I'd probably prefer death over paralysis.
B - are they breathing?
C - circulation - do they have a pulse? are they bleeding?

Having been in a medical role in a former life I find most first aid is the same as it ever was. Not strange really, when you consider the human body hasn't changed. But of course there is always new research and science moves on,  so some things are different.  It used to be you gave 15 chest compressions to one breath and now it's 30 chest compression then 2 breaths. And so on.

Anyhow, I have now completed Fire Safety, Food Safety and First Aid. I know enough to be dangerous in an emergency.

Thank God we are back in the kitchen tomorrow where we will engage in the slow, sensuous delights of braising, and with any luck there'll be no fires, food poisoning, heart attacks or accidents.


Nothing to do with Cooking School per se, but here are some whitebait souffles I just made. They are from Annabel Langbein's book (delicious!) The Free Range Cook, page 185. This is after the first cooking and I will now refrigerate them. When we are ready to eat them later tonight I will pour tablespoon of cream over each one, pop them back into the oven for 10 minutes - they will rise again like Jesus did (apparently) 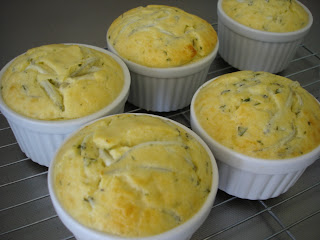