I am in Crete with three of my brothers and two Sisters-in-law. Not that we are a family that holidays together - we're here to participate in the 75th anniversary services commemorating the Battle for Crete.  Dad, who died 27 years ago, was in the 19th Battalion  of the New Zealand army and served here.


You can read about the various battles elsewhere: it's enough to say it all started on 20th May 1941 when German bombers attacked Maleme airfield and then dropped thousands of paratroops, the first (and last in WW2) time a mass paratroop drop had been carried out. After a week of fighting the Allies were overcome and forced to retreat south across the island to a small port, Sfakia.  Over four nights the Royal Navy evacuated 18,000 troops but several thousand, including Dad, were left behind.  Some managed to evade capture. Others, like Dad, were taken prisoner and spent the next four years in a POW camp.

The Germans took vicious reprisals against locals who resisted or gave aid to the Allies. We visit a site at Kondomari where the Germans lined up all the men of the village and shot them in front of the women and children. Amazingly there are photos of the event and these are fixed to the monument. The defiance on the faces of the old men tells its own story.


The steadfast loyalty of the Cretans to the New Zealanders who managed to escape and hide out in caves in the hills and the refusal of captured NZers to identify any Cretan who helped has forged an incredibly strong connection that lasts to this day.  We are treated with warmth and gratitude for the efforts of our fathers. 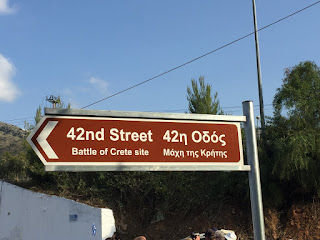 Every May Crete remembers - the battle and those who died. This year we join hundreds of other New Zealanders, Australians and Brits making the journey to join the locals in commemorating those events. Our Governor General Lt. General Sir Jerry Mataparae and Janine, Lady Mataparae represent, as the locals say, "the Queen of New Zealand"; the photo here is him speaking at the Galatas service.

We attend a memorial service every evening and worry there will be no greenery left on the island as endless wreaths are laid. Aside from the notable (Government reps) and the important (the actual veterans), it seems every group from the local association of lawyers to the equivalent of the Country Women's Institute wants to pay tribute.  It takes an effort of will to stand respectfully while 40 odd organisations accept a wreath from a Greek serviceman, acknowledge his salute, lay the wreath, stand still with head bowed, then return to their place.

The War Cemetery at Souda Bay, where many New Zealanders are buried is a beautiful place. We are all moved to tears when two of the four frail NZ veterans who made the trip (only 12 are still alive) support each other to the memorial. It's windy and we're worried they'll topple over as they bend to place the wreath. Later we place poppies on the graves of two of Dad's mates buried next to each other. 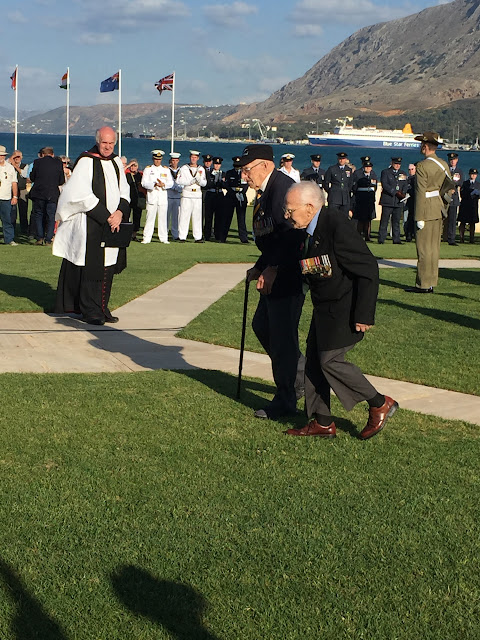 This is a personal trip for us but the emotions for anyone connected with any war are universal.