Aegina is a 40 min hydrofoil trip from Piraeus and a quick escape for Athenians. It bears all the signs of somewhere that was doing a lot better before the financial crisis. On a walk around the coast I see many abandoned houses and larger estates which I'm supposing were second homes or weekend retreats before money got tight.  There are lots of beaches but they aren't greatly appealing (to me at least) and I find Aegina doesn't have a huge amount to recommend it, other than pistachios.

Locally grown and sold in every possible form: raw, roasted with or without salt, pistachio butter, cream, pesto, in sweets with honey and sesame, natural ice cream (which I can confirm is delicious - and not bright green).

Perhaps Aegina is suffering in comparison to Hydra where I had been in the preceding days. I should've stayed there. Famous in some quarters as a place Leonard Cohen lived for years, and probably continues to own a house, the island is idyllic. There are no cars or motorbikes so it's water taxis, donkeys or your own two legs for transport.

The town is built around the small harbour and spreads up as an amphitheater. Postcard perfect whitewashed houses, sprawling bougainvillea, and narrow lanes. Unlike the rest of Greece, Hydra is devoid of graffiti and trash which makes it even more beautiful.  The beaches are stony rather than the white sand other islands boast, which means fewer tourists. 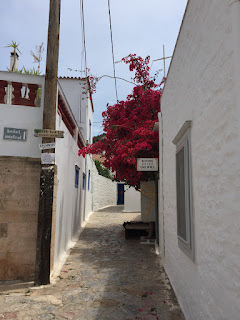 I've had to slow my usual brisk walking pace to a slow meander. No one is in a hurry and everything is relaxed and casual. I'm amazed at how I can spend a ridiculous amount of time drinking ouzo, eating pistachios and watching the world go by.  Greeks spend hours sitting with coffee or a drink chatting and arguing vigorously.  And smoking, which is still a national sport here. As is lingering.  Wait staff never clear your plates or even look as if it's time for you to go.  You can sit with a coffee for two hours and no one bats an eye. They say coffee is expensive because you're renting the table and chair!
It's difficult to judge the impact of the financial and refugee crisis from what I've seen this trip. Last year we saw the tip of the Syrian exodus when we were in Lesvos.   There is a general feeling of antipathy towards Germany, neatly summed up by a hotel receptionist as "it was the bombs and now it's the banks".  I forgot to mention in the Crete blog that we also visited the German cemetery. We didn't attend the memorial service but heard reports that it was disrupted by a demonstration, not so much about what happened 75 years ago but protesting the austerity measures.  There are plenty of German tourists though, so maybe they'll get their bailout one Euro at a time!
Posted by Happy Cook at 08:13