Rocking it on Niue

On a recent cruise up the North American coast to Alaska, my brother noted there were more whales on board the ship than in the sea.  Luckily for us, the reverse is true on our week on Niue and we see whales in the ocean most days, although it's fair to say some of the locals do carry quite some heft.
It's July and the humpback whales are migrating to warmer waters for a winter getaway and some fun in the sun.  They come into the bay outside our accommodation, wave a dorsal fin, blow a little spume, then show us their graceful butts as they dive deep again.
Also known as the Rock of Polynesia, Niue is a different little island. North east of Auckland by 2,400kms, the island is tiny -  260 sq kms, a raised coral atoll with its highest point just 69m above sea level. A lava shelf extends into the sea and then drops to a depth of about 30 metres. This extends about 200 metres or so then the outer reef drops very steeply to 2000 metres of very deep blue.

Forget long sandy beaches, a hammock and sheltered lagoons - you have to take ocean paths and often need to climb down steps or ladders to get to the swimming and snorkelling spots on the rugged coastline.  Even then it is only possible at low tide as the swells rolling in hit the lava shelf pretty violently. The coast here is a slap up side the head rather than a gentle kiss on the cheek.

Makes you wonder why you'd come doesn't it?


There's sunshine and warm water, snorkelling, diving, fishing, swimming with dolphins and whales, exploring chasms and caves and rocky coves, and a very laid back vibe.  It doesn't attract lots of tourists, possibly because it lacks the requisite sandy beaches. Anyway there are only two flights a week so that limits numbers.  So exciting are flight days pretty much the whole population turns up at the airport and enjoys a picnic while waiting for the flight to land. There's not a lot of entertainment on the island.

Once a month a freighter brings supplies. The reef shelf means it can't dock at the wharf so it anchors off and a barge ferries containers to the wharf where they are winched ashore.  It's lucky for us our visit coincides with the freighter's arrival -  an hour or two of entertainment PLUS the supermarket will be resupplied!

As with all the Pacific Islands, everything is very relaxed and runs on "island time". That means the OPEN sign may mean open later, open sometimes, open only on Friday, or on rare  occasions, open right now.

We pick up our rental on arrival at the airport and are told to come in to the office in Alofi (the main village) sometime during the week and pay.  No perusal of licences, flashing of cash or credit cards required at this point. One requirement is a local driver's licence but it's Friday, so we are told to call in to the Police station on Monday. The licence costs $22 and this is so clearly a money making exercise we decide only one of us needs one.  So it's pay up and come back later for the licence.

Later, at 4:00pm, "we're just closing, come back tomorrow".  Tomorrow we get the licence, and chat to the Sergeant who admits that for an island of 1200 people a Police force of 14 is probably 10 too many.  You think??? There's not even any evidence of crime on the island.  Besides, everyone knows everyone else and where the hell are you going to hide? Or how are you going to get off the island?

Usefully, the licence is valid for a year in New Zealand, so if you are high on demerit points it may be a good idea to pop up to Niue for a spare licence!
The island closes on Sunday and the place to go is the Washaway Cafe at Avatele, a sheltered bay on the southern end of the island.  An honesty system operates - a serve yourself outdoor bar, write your name and what you had in the book and pay before you leave.  I think they do great burgers, but as the place was packed there was an understandable and very relaxed long wait for it, and after several gin and tonics I could've been eating whale and wouldn't care.

Rumour has it some people come to Niue and don't leave, or come back year after year because they fall in love with it.  After a week we are pretty relaxed and another few days or a week would be welcome. But all in all, there;'s something to be said for a sandy beach, a hammock and a sheltered lagoon. 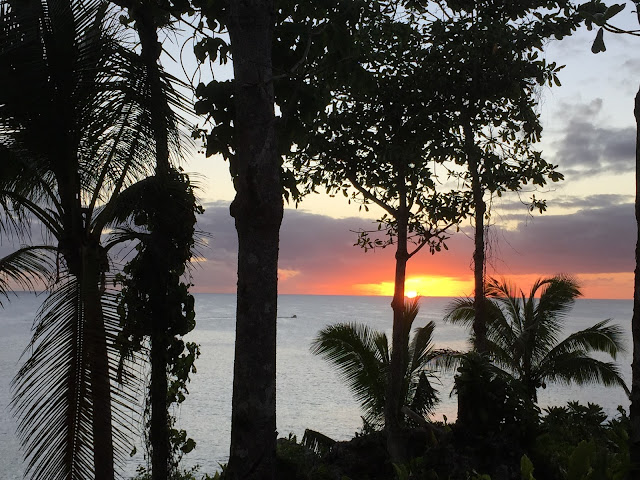