Hrvatska - land of my father - or in this case, my mother's father

In 2015, looking at the stunning scenery and peaceful (now!) life in Dalmatia, Croatia, it's hard to imagine why you'd leave for an unpredictable and unknown world in New Zealand.  Yet almost exactly 102 years ago that's what my Grandfather did as a teenager, leaving behind his family and everything familiar to arrive in New Zealand on the 13th July 1913.

What was he thinking?  Probably that a life of predictable and known hardship was before him if he stayed.

The rugged beauty of the landscape that we find so attractive limited (and still limits) Dalmatian life to subsistence farming along a thin strip of arable coast, a bit of grape growing and fishing. It hasn't escaped me that I've just described the h-g's ideal life - except for the subsistence bit.

The drive down the coast was gobsmackingly beautiful. One picture perfect seaside town after another, all tucked in down from the road, with the massive mountainside looming up behind. Warm at 27 degrees, flat calm, and the ocean a deep navy blue.

But more of that in the next installment - for now we are in the north, a very different landscape.

We flew into Zadar, on the northern coast of Croatia, and drove north east to the most famous UNESCO World Heritage site you've never heard of - Plitvice Lakes National Park. 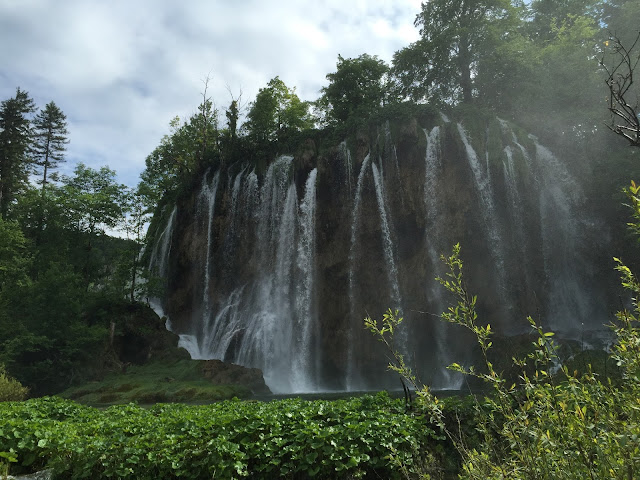 The drive crosses the bony ridge of the Kapela range and links through a series of tunnels. When the Bora, a northern wind, is blowing the highway closes; the wind funnelling down the valleys has been known to blow cars off the road as they emerge from the calm of the tunnel to the smack of the wind.

Of course, it's a windy day and Marija, as we have named our GPS know it all, seems unable to understand the road is closed and WE NEED THE DETOUR. In the end she and I have a major falling out and I shove her in the glove compartment until she can speak nicely again.

We finally arrive, later than planned.....which turns out to be a blessing as bus hordes arrive in the early morning but are mostly gone by about 2 or 3 pm.

Plitvice National Park - here we have 300 sq kilometres of park with 16 lakes connected by a series of waterfalls. Eight kilometres of lakes and waterfalls descend from 1,280 metres to just 380 metres.   A series of walkways, most of which would cause an Occupational Health and Safety inspector to have a fainting attack, descend along the falls and lead you along the edges of the lakes,

While the walkway in the photo doesn't look busy, we'd at times find ourselves behind a busload of dawdling tourists, two or three abreast, taking up the narrow width of the walkway. The temptation to elbow them into the lake was sometimes quite overwhelming.

The flow varies from calm to raging, and as it had rained for a few days before out visit there were a lot of mini Niagaras.  At times the water was so high it was seeping up through the walkways, which was rather exciting, if dampening. 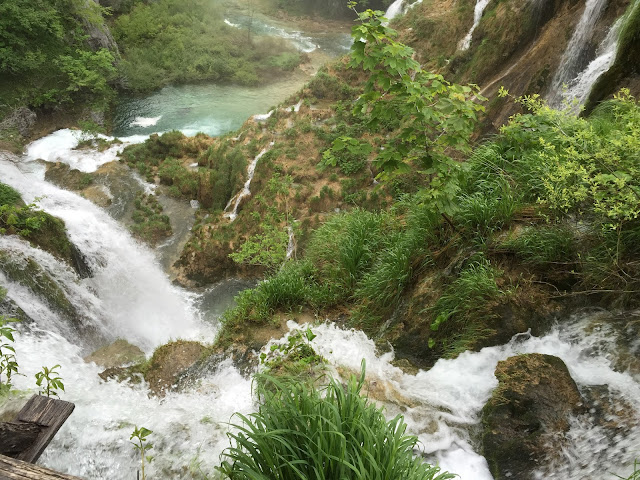 We planned to take the inland road south from Plitvice but you guessed it, somehow that bitch Marija had us back on the motorway.  As it happened the high winds had lessened and it was very cool traversing the mountains through the tunnels.

We detoured off well north of Split and drove east to Vrlika, randomly chosen off the map we bought at a service stop - yes a paper map where you can see roads and towns and terrain, as opposed to a wiggly pink line on a matchbox sized screen. Sorry, Marija, but I love a good map.