What colour is nostalgia?

Does it have a colour at all?  A few days in my turangawaewae (literally a place to stand; more generally, where you come from) of Taranaki had me thinking nostalgia has the colour black.

But not in a bad way.

The black of the volcanic iron sands on the beaches - it makes me remember the beach trips of my childhood when you left the safety of your towel and ran across the scorching sand to the cool solace of the ocean.  There were countless picnics at New Plymouth’s Ngamotu Beach, where you’d lie under the pohutukawa trees and get ready for that run across the sand.  Bacon and egg pie, sandwiches and orange cordial. The taste of childhood.

In retrospect, New Plymouth doesn’t have a standardly beautiful beach, yet a working port and towering power station chimney give it character and a certain grim beauty.

The black of the sugar loaves rearing out of the sea at the harbour.  I’ve just had to google why they are called sugar loaves.  They are the Sugar Loaf Islands and, along with the pinnacle rock Paritutu, are the remains of a ring fracture or eroded volcanic vents, yet for me they’re an indelible memory of Taranaki.

The black of Mount Taranaki (2,518 metres) against the Summer twilight.  I grew up under the shadow of this mountain, though  until 1986 it was Mount Egmont, named by Captain Cook after some British nonentity.

The black of the rocks along the shore.  There’s now a coastal walkway/cycleway stretching 11 kms from the Port to suburban Bell Block.  The path runs close to downtown, along surf beaches, across several rivers, through a wetland and emerges in a park. 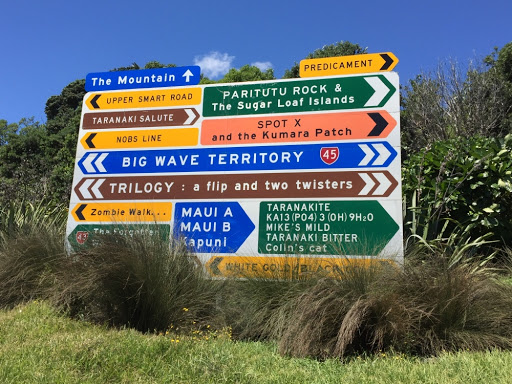 There’s a beautiful bridge that on a perfect day, rare in Taranaki, frames the moutain.

If you squint, the mountain is visible in the photo.

There are a number of sculptures along the path, not least the 45 metre high Wind Wand, another Len Lye design that was too complex when he came up with it, but modern teachnology and engineering made possible.

Or maybe it’s just the black heart of the bitch nun who haunted my high school years and, apparently, haunts me now.  You know who you are Sister Barbara.

Now I have to add silver to my memory bank. The recently completed addition to the Govett Brewster Art Gallery is the spectacular Len Lye Centre, a home for the kinetic artist’s works and archive. Disappointingly few of his sculptures on display but the architecture of the Centre alone is worth the visit.

To quote the website “Like a Lye sculpture, the shimmering stainless steel façade is a striking and provocative expression of movement. The curtain-like exterior is seemingly fluid as the curved steel reflects and transmits light, activating the spaces within and without. It is a modern day temple, reinterpreting Lye’s fusion of ancient and modern concepts, and his proposition for a ‘temple of art’.”  What they said.    For me it was a chance to relive memories of a misspent youth - hours spent underage drinking at the White Hart hotel wine bar instead of taking Physics.  Sadly, the White Hart Hotel has become ‘trendy’, and is now the sort of venue old school motorcycle gangs wouldn’t be seen dead at - let alone underage Catholic school girls.
Posted by Happy Cook at 21:12