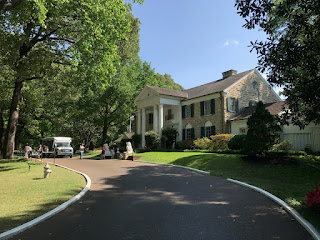 If you are coming to Memphis then it's illegal to miss Graceland.  We aren't Elvis fans but feel we must make the pilgrimage to South Memphis.

We arrive early and, having opted for the Elvis Experience, get piled into a small theatre for a short, poorly edited video on the life of the King.  We file out of the theatre, have photographs in our happy excited groups before joining a queue for the bus to the mansion.  Note that at the end of the tour the photos are available for purchase at $34! There aren't many takers.

Armed with iPads and headsets we load onto small buses and ferry a short distance down Elvis Presley Boulevard to the gates of the Graceland.  Rather like the idea of the pearly gates, I'd half expected a shimmering light from the sky and the sound of trumpets.  Sadly no, just another guide shuffling us through. This really is a factory - it's like the McDonalds of tours.

We're moved through the house too quickly. This is a shame as it's fascinating, mostly because everything stopped in 1977 when Elvis died. The peanut butter and banana sandwich he was eating is still on the kitchen bench!  Not really.  He died after a game of racket ball - on his racket ball court built out back of the house.  For anyone interested in 70s interior design, only the kitchen and living room are typical of the era.  And his parents' bedroom which, in comparison to the rest of the house, looks like a monk's cell. 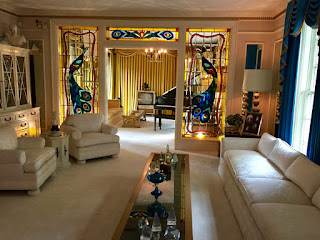 The other rooms are definitely the 70s, but the extreme version and on steroids.  Like the bright yellow TV room with three TV sets; the Jungle room with its green carpet on the floor AND the ceiling and with a waterfall on one wall.  My favourite is the pool room with its fabric pleated ceiling and wall coverings, which took 10 men three days to complete, and stained glass lights.  If you're familiar with the Australian movie "The Castle" you can imagine a lot of things going straight to the pool room. 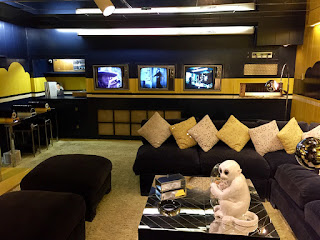 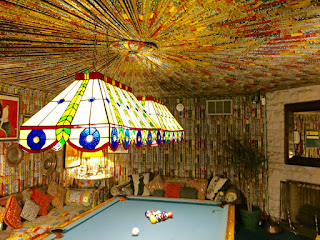 Elvis seemed quite fond of monkeys - the decor includes lot of monkey statues and, along with a menagerie of other animals, Elvis had two pet monkeys.  Is it possible Lisa Marie married Michael Jackson because of some deep rooted monkey issues?
Our tickets get us in to Elvis Presley motors which hold 15 - 20 of his cars. Everything from the pink Cadillac to a custom built Rolls Royce. Then there's the motorcycles, Harley Davidson golf carts (yes, who knew?) and dune buggies.

With 1.5 million items in the archive there's far to much to have on show, and let's face it, most of it too boring for all but the most avid Elvis fan.  Seriously, who can get excited about a typewriter or a lamp.

Now jumpsuits are another matter! All the same cut and style, and clearly he wasn't as fat as we thought, but with different extravagantly bejewelled designs.

For non Elvis fans we enjoyed it more than we expected and stayed longer then we thought.  He may be dead, but the King lives.