On a rainy day in Moscow

In any European city there is always a gallery or museum to keep you entertained on a rainy day.  In Moscow you take the metro.  Forget the dirty or graffiti ridden metros in other cities - Moscow's stations are subterranean cathedrals of art, architecture and extravagance. 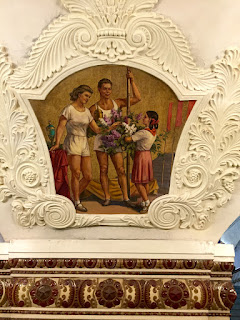 The metro system began under Stalin in the early 1930s and today runs 330+ kms of line.  The escalators are some of the longest I've been on - the deepest station is 74m underground.

London engineers were consulted and although Soviet workers provided the labour, the main engineering designs and construction plans were done by English specialists. Ultimately paranoia ensued, and the secret police arrested and tried several British engineers on charges of espionage (as they had such extensive knowledge of Moscow's layout) and deported them in 1933. Clearly the Russians forgot to ask how to position graffiti and tatty posters and advertisements as the Moscow metro is in pristine condition.

Once you've sorted out the Cyrillic alphabet, it's relatively easy to find your way around. However if you need to transfer to another line the station will have a different name, which can be confusing.  For the small investment of 100 roubles (about $2:00) we had a morning's entertainment getting on and off trains and gasping in astonishment as each hallway is more beautiful than the last. Extensive use of marble, high ceilings and lighting lend a palatial ambience. 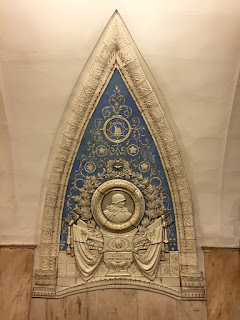