I suspect New Zealand is the only country in the world to respond to the global financial meltdown by building a cycleway from one end of the country to the other. 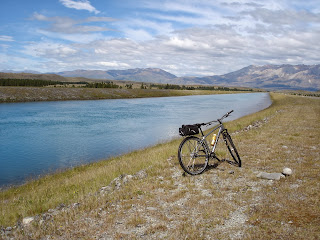 $50 million of Government funding kicked off the design and construction of Nga Haerenga, the New Zealand Cycle Trail and the Department of Conservation and local Councils, among other groups, also contribute.  Four years on, the project is far from complete  - nothing is never as easy in execution as it is in conception - however in 2010 there were only two multi-day trails available: there are now 23 "Great Rides".

Last week our group of friends cycled part of the longest, and what must be one of the most spectacular trails - the Alps to Ocean.  Starting in the Southern Alps at New Zealand's highest mountain, Aoraki/Mount Cook, the 310 km trail descends 540 metres down hydro lakes, canals and river valleys out to the Pacific Ocean.

There are eight distinct sections to the ride, with distances ranging between between 19 and 53 kilometres.  Our plan, developed by our well organised leader,  is two days riding four sections rather than the recommended 4-6 days to do the whole thing - unfortunately the chosen sections have some of the hardest bits, especially for those of us who use our bikes for casual recreational use rather than Tour de France training.


Normal people would probably cycle each of these sections in one day each, but as it happens our organiser is Lance Armstrong's sister (although her performance enhancer of choice tends more towards the Chardonnay).

Day one starts well enough.  We drive to Twizel, a quiet hydro town with no discerning features other than its location in stunning scenery.  At cycle support HQ we exchange our cars for bikes and venture forth.

The hunter-gatherer leads off confidently. "Do you know where you're going?" we shout. "Yes" comes the reply, so like stray ducklings we follow.  When he stops at a nearby service garage I realise he is visiting a mate, and the rest of us cycle on.  I have a growing sense of unease as to our direction. We stop. We check the directions. We are heading the wrong way. The h-g catches up in time for me to berate him.  His defence? He said he knew where he was going but didn't say it was where we wanted to go.  When I divorce him I shall use this as an example of irreconcilable differences. 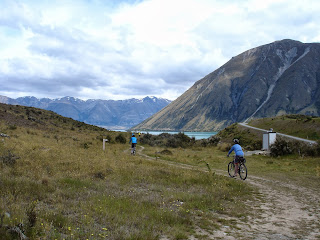 It is a beautiful day for cycling - calm and clear -  and the trip along the canal is an easy ride.  We cross the weir at the head of Lake Ohau and then follow a meandering compressed gravel cycle/walk way that skirts the edge of the lake.  The views are of expansive skies, a flat lake unruffled by wind, and flowering rock roses.  We disturb a small flock of sheep and follow them for a short distance as they trot madly in front of us.  Bucolic bliss.

That is until we come off the bike path and meet the next section of road taking us to Lake Ohau Lodge, our accommodation for the next three nights. It's the longest  ten kilometres of my life as a head wind has whipped up out of nowhere.  Eventually we attain the Lodge where our fearless companions (who have driven) have set up a wonderful picnic.  We fall on the food as hungry wolves and force down a glass of wine or two, just as a reviver you understand.

But wait! cries Lance's sister, there's more!  More food? No, another 40 kilometres.  However I have read the trail guide  " ....the track narrows and it's a steady climb to the high point on the trail, 900m above sea level [10.8 km]. Please allow plenty of time for this section, and take frequent breaks if you are feeling tired. It is advised to bring some high energy food, as you may require a boost".

Seriously, does that sound like fun?  Nothing will incent me to get back on the bike; most of us opt for a hot shower and a lie down.  Lance's sister, her husband the truffle hunter and the determined GP are the only three to set off, possibly never to be seen again.

Many, many hours later a txt arrives along the lines of -  Did it. Buggered. On the bus. Need a drink.  The cycle transport company delivers our triumphant trio and we raise our glasses in awe.  More of our party arrive that night so on day two  a larger group of cyclists take transport to Omarama to begin the 68 km ride for the day.  Half start from there (yesterday's end point) and some of us elect to start a bit further down the road.  Actually it's at the top of the saddle so we start with a long, luscious down hill section.

It's not all beer and skittles though. As we leave Otematata and head up to Lake Benmore hydro dam, the trail description rings in our ears "It’s a steep road up to the dam, so you may need to walk the last 800 metres".  Yes of course we bloody do!!  Well, all except one of us.


Mercifully the road down the other side of Lake Aviemore, across another dam and along another couple of hydro lakes through the Waitaki Valley to Kurow, is only slightly undulating and ever so slightly downhill.  All of these lakes, rivers and towns are parts of the history of hydroelectric power generation in New Zealand and terribly fascinating of you are that way inclined. .

However, by this stage our interest centres on a wine tasting that has been arranged for us. After a reviving cup of coffee we adjourn to the  'Vintner's Drop' - a Waitaki Valley regional wine tasting room in the Old Post Office in Kurow.  The Waitaki Valley is one of New Zealand's newer and lesser known wine areas, but should become world famous for its stunning Rieslings and Pinot Noir.  We do not stint on either tasting or buying.

Out trusty cycle touring company transports us back to Lake Ohau Lodge for another convivial dinner, a considerable amount of wine and the sleep of the innocent.

A weekend of great company, good food and wine and a "little bit" of exercise in the most outstanding scenery. Is this what heaven is made of? 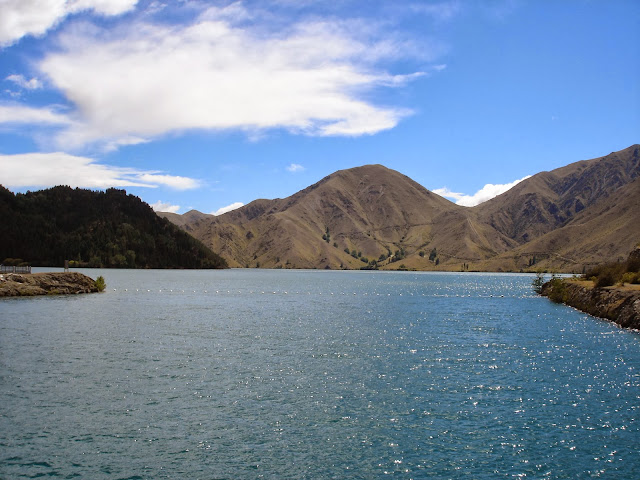