I sandwiched my trip to Kenya between the airport burning down (that actually happened within a couple of days of my arrival) and the terrorist attack on the mall this week.

The six hour drive north from the hellhole that is Nairobi to Samburu National Park passes quickly: a 7.00am start means the notorious traffic isn't too bad leaving town, but we pity those travelling in.  Three lanes of nose to tail for several kilometres.   Nairobi sprawls, so it takes a while to get through the outskirts and we drive past some extremely ramshackle areas - alright, slums.  Incidentally, those three lanes in each direction were paid for by the Chinese.


Over the next few hours the landscape changes several times: well tended small holdings, coffee plantations, and a large pineapple plantation.  As we climb around the outer foothills of Mount Kenya, extensive greenhouses support export crops of roses, carnations and vegetables. Wheat fields stretch across the plains and then, without fanfare, we cross the Equator.

The road is sealed the whole way and in good condition.  It seems the last section as we reach Samburu is relatively new..... since the discovery of oil in the desert further north.  We are now about halfway to , and  lies that and a bit more to the east – at the time we don’t think that’s remarkable, but events this week tell a different story.

A 24km dirt road takes us to the park gates, where Henry and Richard our two drivers complete the paperwork and get us in.
Naively, I decide to list all the animals and birds I see on the Kenyan trip. As with many of my resolutions, this lasts less than half an hour. By then we have spotted vulturine guinea fowl, ground squirrel, Oryx antelope, red billed hornbills, white backed vultures, dik dik - which might just be the cutest wee antelope ever - reticulated giraffe (as opposed to two other kinds we'll see further south) baboon, ostrich, and zebra.  If I keep writing them down I won't have time to look at them, so I abandon the effort.

When we go out for our evening game drive - there are two each day, one at dawn and one late in the afternoon - we are treated to the spectacle of a herd of elephant, 15 or 16 including babies, coming down to the river for a drink and a bit of a wash.  It is amazing how comfortable they are passing close to the vans, but they are used to them.  This has a downside or course as poaching is still a huge problem.  Remember the highway? Since Chinese construction started in it is estimated 150 elephants have disappeared.  Call me cynical, but this can't be a coincidence. 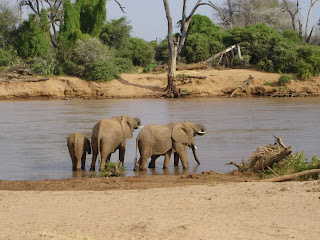 Out on a drive you never know what you will see.  As word of a cheetah or leopard sighting is conveyed to our guide over the CB radio, a red mist descends and he transforms from mild mannered driver to rally champion.

Our adrenaline surges and we laugh maniacally as we careen down rough roads to get to the spot.  The suspension on our pop top van must be amazing, and I silently thank the blogger who recommended a tight fitting sports bra.
Of course we are not the only ones in the park.  At one point when we arrive at where a cheetah has been seen,  I count 22 vehicles, all waiting for the cheetah to show itself. I wonder if the cheetah thinks he is supposed to be the hunter not the hunted.  When he emerges from the bushes and wanders past us, he's so close to my window I have to restrain myself from reaching out to stroke him.

We all marvel at the unusual athleticism of the gerenuk antelope as it stands on its hind legs to graze on leaves.

It doesn't lean against the tree but stands erect and even uses its front legs to pull down higher branches. Not surprisingly, it is also know as the giraffe antelope.

By the time we depart Samburu we see  what seems like hundreds of animals and birds, and can tick off the five species that are only found in East Africa, generally around the Equator:

Samburu Lodge overlooks a river which runs from Mt into the desert north of here, culminating in a sandy swamp.  Vervet monkeys are everywhere and you need to be careful to close everything up or they'll move into your room and set up house.  They are very cute, but as I did not get a rabies vaccination I am keeping my distance.

In the evening, the staff throw lumps of meat to the crocodiles that live in the river - not joking.  It is a testament to Pavlov's theory that at 7.00 pm every night the crocs haul themselves out of the river to the dusty bank a few meters away from where we are having our gin and tonics.  It makes walking back to your room quite an adventure when you've seen a massive, and I mean massive beast chowing down.  There's another great Kenyan disaster news item: croc consumes tourist.