Back to the future in Hong Kong 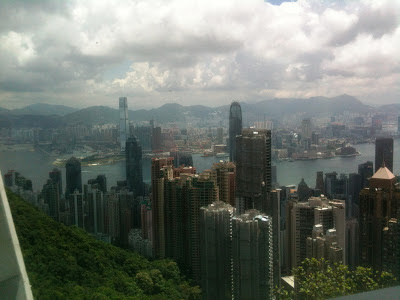 Thirty years ago I was 27 and moved to Hong Kong to work for three years - long story.  With beautiful symmetry, 27 years later I  return for a week wandering down memory lane - or multi-lane highway, depending on where I am at the time.

So what's different?  Aside from  now being a middle aged woman and not a party girl in my late 20's?  In Hong Kong quite a lot, and strangely enough, not much.

It's still a growing city and is unashamed of being so.  It builds high rise towers, roads, bridges, pedestrian overpasses, underground (MTR) lines and stations with no apology.  I suspect "consultation with the community" is an unknown concept, but equally there's little "not in my back yard" wowserism either.  Everyone expects progress so progress happens - stuff gets done and as a consequence the infrastructure works.

This means it's easier than ever to get around.  The public transport system is excellent. Since I lived here the MTR lines have crept under the city  in every direction, including a direct express from the new airport on Lantau island, linked to the city via causeways.  This somewhat removes the excitement of landing between the apartments and washing lines that squeezed the old runway at Kai Tak, but it's certainly efficient, delivering you to the city in 24 minutes.  Taxis are cheap, as is travel in general and an octopus travelcard makes it very easy. Over 6 days travelling all over the Island and Kowloon including return trips to the airport, I spent less than $70NZ - in London that might get you a couple of days in Zone One, or a dozen trips on a Melbourne tram. 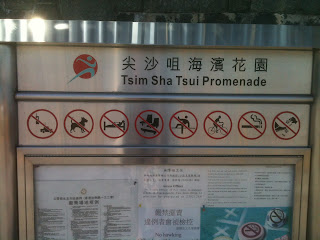 I am amazed at how clean the place has become  - not Singapore clean but very, very clean: the streets have no litter; the air is clean - no need for industrial strength cleanser on your face at day's end, and when you blow your nose, the output isn't black!  Public toilets are a positive revelation - it is all no touch hand cleaning: soap automatically dispensed, water on a sensor.

Smoking must also have been banned: I can count on both hands the number of people I saw with cigarettes. 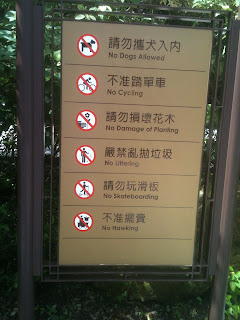 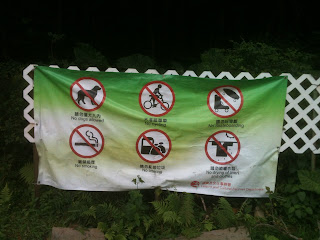 However, bureaucracy has gone mad and there are signs everywhere forbidding everything.


Wanchai is still the Wanch, but becoming a bit less so with the advent of a cafe and restaurant culture (a separate blog on Hong Kong eating is forthcoming). There are still seedy looking bars and dens of obvious iniquity, but these seem to be confined to the north side of Lockhart Road.  I walk past a long standing institution, The Old China Hand, on a Sunday morning and observe sweet, faced Thai and Filipino girls in short skirts giggling with (or at) ruddy faced, paunchy white men drinking sweaty pints of beer.  Across the street on the steps of a place called Players, a fight breaks out between Chinese men. I don't see any machetes, but am motivated to move along.

There are well in excess of 150,000 Filipino maids working in Hong Kong.  On Sunday, their day off, they meet up around Central and spend the day picnicking and chatting with their friends.  Early in the day they stake out their space using flattened  cardboard boxes, filling the areas in public and squares along the overhead pedestrian walkways that connect high rise office blocks and shopping malls.

It all takes on the appearance of a convention for the homeless, which in essence is what they are as they leave their families to earn a living, by shopping, washing, cleaning and cooking for ex-pats and more well off locals families.  Domestic workers have no residency rights. If they leave and employer (or any employer leaves them) they have two weeks to find another job before having to leave the country.  In a recent court case  a maid, resident in Hong Kong for 17 years, tried to challenge the law which allows other ex-pats (in non domestic roles) permanent residence after seven years uninterrupted residency.  She failed.

Strange as it sounds, there are now more Chinese in Hong Kong.  Visitors from the mainland are now the greatest proportion of visitors, and it seems the hot attraction is infant formula.  In March 2013 the HK Government set an export limit of 1.8kg on the product.   Clearly not everyone got the memo if the women in a supermarket foyer packing multiple large tins of baby food into a suitcase were anything to go by.

Yes, but what did you buy I hear you ask.  A bar of soap and six spoons.  Seriously.  One of the beauties of no longer working in a corporate environment means there are none of the associated wardrobe requirements: that leaves more money for hedonistic pleasures.......food blog forthcoming.