Week 30: Around the world in multiple meat dishes

We start the week at the business end of cookery - that is with a hunk of beast (no, not the tutor) and a demo of boning out the fillet and the sirloin. 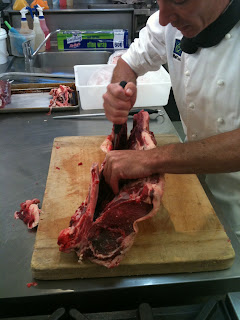 We cut 160gm sirloins, vacpac and set side til Thursday, and slice up another 180 grams to make something I haven't made since the late 1970s - Beef Stroganoff.  Stroganoff - now that drives me off to my friend Wiki immediately.  It has its origins in 19th century Russia and is popular in various forms around the world, from Portugal to Brazil to Japan to Sweden. Wiki reports many recipes and variations exist, and goes on to add somewhat frighteningly: "with or without wine, with canned sweet corn, with ketchup ..."  Hmmmm.


Chicken Kiev. The height of sophistication in the 1970s. Where did this dish originate? Wiki is uncharacteristically brief and tells me the name comes from the capital of Ukraine, Kiev (duh!)  However, the Russian food historian  William Pokhlebkin claims that Chicken Kiev was not invented in Kiev but in the Moscow Merchants' Club in the early 20th century and was renamed Chicken Kiev in one of the Soviet restaurants in later years.  So now you know as much as I about the etymology of the dish.  What I find more interesting is that when Marks and Spencer first introduced ready made meals in 1975, guess what was first off the block?  Pay attention, you may need to know this for a pub trivia quiz one day... Yes! Chicken Kiev.

Pound a chicken breast and stuff with cold garlic butter with herbs, then pane (i.e. flour, egg, breadcrumbs and egg and breadcrumb a second time to ensure the fillet is well sealed) and fry or bake.  I stop short of either and freeze the stuffed breasts for future baking.

We break down (chef talk for cut up) another chicken into sauté cuts: 8 pieces, comprising 2 drums, 2 thighs, and 4 breasts. Don't be alarmed, I know the hormones they feed poultry are bizarre but the birds we break have only two breasts,  each one is cut into two, yielding four breast pieces in total.
﻿﻿﻿﻿﻿﻿﻿﻿ ﻿﻿﻿﻿﻿﻿﻿﻿﻿﻿﻿﻿

We make a Thai Green Chicken Curry using half the chicken we sauté cut on Monday, having already prepared Thai green curry paste. The other half of the chicken becomes Chicken Chasseur.  Chatty girl, the one who never stops talking, gives a dissertation on how she always thought  "chasseur" meant shoe - she works in a shoe shop part time.  An easy mistake: la chaussure is shoe and le chasseur is the hunter.  Yes, aside from the spelling and difference in pronunciation, note a gender difference: shoe is feminine and hunter is masculine. You can see from the photos they are two entirely different things!
﻿ ﻿
﻿ ﻿ ﻿﻿
﻿ ﻿ 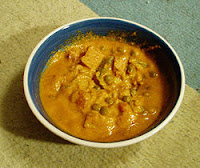 I have my suspicions about the origin of korma, and entertain a notion is is an English curry bastardisation of an Indian dish.  However, my notion is unfounded.  Although the origin of the word korma is Turkish, the dish is traditional Mughlai cuisine and can be traced back to the 16th century.
What else this week?  A delicious crusted lamb rack.  First we French trim the rack, taking off every skerrick of sinew and connective tissue to leave a clean bone, then smear Dijon mustard and herbs over it, crumb and cook.  We also grill the sirloin steak and make Duchess Potatoes - a puree of potato, egg and butter with a pinch of nutmeg, piped into a conical meringue shape, egg washed and baked to give a crust on the outside.  I am sure you've eaten these at some time or other.
We also make one of the many Duchess derivatives,  Marquise Potatoes.  This involves piping the potato into a nest, filling it with sweated shallots, concassé tomato and parsley, then egg washing  before baking. I SO wish I had my camera to show you these little beauties.  Actually they taste better than I expect.
Way, way back in Week 3: Hot stock and several smokin' sauces, I talked about how a base stock or sauce becomes so many others. the derivatives are the same with potatoes - a base puree then countless derivatives. A basic roast potato and countless derivatives. A basic sauteed potato and - well, you get the picture.  I could write a whole blog on potato derivatives but I will restrain myself.

Next week? More meat - including an exciting installment on offal. I will cook sweetbreads for the first time. Stand by.