Welcome to 2012 and the final leg of the journey. We have nine weeks of classes ahead before we all go off to complete three weeks of work experience "out in industry". We have to organise this for ourselves, so that is causing some consternation for some people. After work experience it is back to class for a week or so then it is all over. Time flies.....

On the first day back we number seven. Yes, 7. During the week one or two more turn up - China boy had trouble with flights out of Hunan province; sadly, mother of three's own mother died over the holidays and she is having trouble getting it together; not sure about the others. By the end of the week we are nine, but I am pretty sure we'll settle at eleven for the rest of the course, which means 60% of our starting group will finish. I am not sure about the drop out rate in the other three groups. 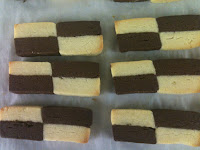 This week we settle into desserts and cakes. On Monday we make Petit Fours, Chocolate brownies, Shortbread, and Chocolate Genoese Sponge. Petit fours - the literal translation from French is "little ovens" - are little treats generally eaten with coffee at the end of a meal. They come in a variety of forms, for example tiny iced cakes, or macaroons, or the ones we make which are crisp buttery biscuits. We make Battenberg biscuits which, like Battenberg cake, is a checker board. To answer your unasked question, the history of the Battenberg cake is as follows. It was was created in 1884 in honour of the marriage of Queen Victoria's granddaughter - Princess Victoria of Hesse and by Rhine (which makes her sound a bit like a racehorse) to Prince Louis of Battenburg. The four squares of the cake - or biscuit - represent the four Battenberg princes: Louis, Alexander, Henry and Francis Joseph. The marriage was a love match, unlike many royal pairings.  During WW1 two of her sisters who had married into the Russian royal family were murdered by communist revolutionaries, and she and her husband abandoned their German titles and adopted the British-sounding surname of  Mountbatten - an English translation of the German "Battenberg". Incidentally, she was the maternal grandmother of Phil the Greek.

Chocolate Brownies, on the other hand, were created to celebrate the love match between women and chocolate, and subsequently cardiologists and their consulting fees.

If you need reminding about the gym workout involved in making a Genoese sponge, review Week 16: Sure to rise. We make the sponges on Monday then use them as the layers in our gateaux on Tuesday. Stage one, even up the cake and slice into layers. Stage two, smother layers with butter cream, sandwich together and drown entire cake in butter cream. 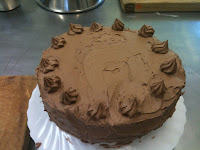 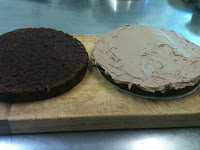 Stage three, decorate as artistically, or not, as you like. The best part is making the chocolate shards I have to say. Now, I do not eat this creation, however the banker and the accountant assure me it is delicious and enjoyed by them and the wider family. 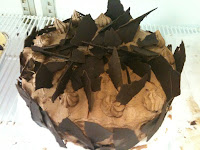 The week continues with Tiramisu, Carrot Cake, Baked Cheesecake and I can't remember what else, even though most of it has made its way onto my hips. I must stop licking the spoon. It adds up, not to mention being very unprofessional and un-cheffy.  As you can imagine, the hunter gatherer is very happy with the avalanche of baked goods and puddings.

No assessment this week but we finally get our assignments back - see Weeks 19&20: Menu planning and more nutrition. In the PC way of New Zealand modern education we are marked "competent" or "not yet competent". However my tutor's feedback is that my assignments are excellent and it was hard to mark others after mine because of the contrast effect, so that was good to hear. Not that I am competitive.....
Posted by Happy Cook at 12:12