This week, the fine art of frying: shallow frying, deep frying, stir frying, sauteing. I'm sure I see - and eat - more fried food this week than in the past ten years combined. Yes, it's true, fat does taste good - but only when food is properly prepared and cooked.


All the same, I do think  it is best to interfere with fish as little as possible. In class, using terakihi, we interfere with it three different ways: ﻿
﻿

1. Fish/Poisson Meunière - where it is simply tossed in seasoned flour and pan fried. Interestingly, the French word 'le meunier' means miller. Those of you who know French nouns have a gender may briefly ponder a potential franglais inconsistency: in French fish is le poisson (masculine) and meunière is the feminine form.  On the other hand if we refer to the dish as it probably should be referred to, that is as Fish à la Meunière then it is fish in the style of the miller's wife. She probably had plenty of flour to hand and so simply dredged the fish and fried it - in butter of course. And then, if that wasn't enough, made Sauce Meunière - melted browned butter, lemon juice and parsley.
2. Fish à l'Orly - fish in the style of Orly (which is south of Paris in case you wondered). Essentially this is battered fish as you know and love it. In class we use terakihi (yum), beer batter and the deep fryer, and it is pretty good.  Tips and tricks around this are to really make sure the batter only thinly coats the fish but coats it fully. The batter, or indeed any coating, protects the fish from the oil: the theory being it is the steam build up inside the batter than cooks the fish. How's that for justification for eating deep fried fillets??

3. Fish à l'Anglaise - English style is flour, egg and breadcrumbs - and deep fried. This is where the translation really falls apart, as we all know battered fish is an English thing. Not in classic cuisine, however. The two French students who turn up this week to spend two weeks at Weltec followed by two weeks work experience in town, confirm they too call this method of coating food 'pane anglaise'. 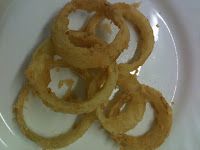 We make tartare sauce, of course making the mayonnaise base by hand -  beating, beating, beating the oil into egg yolks. We sauté potatoes, cook tempura vegetables, and deep fry onion rings à la française - in the French manner - which is milk and flour, and deep fry chips. For the chips we cut the potatoes evenly - 6cm x1cm x1cm awakening nightmares about carrot cuts from week one. Cooking the battered fish and chips involves two stages, just like the local fish'n'chip shop. The first frying is at a lower heat - 150°C and is called blanching - partially cook and do not colour the food. It is let cool and then the second frying is at 185°C and crisps everything up. Heston Blumenthal, having spent a long time investigating how to make the best chips ever, brings his chips to the boil before draining and cooling them right down in the fridge. His second cooking is blanching in 130°C oil before he completely cools them again. The final fry is in 190°C oil. Apparently this produces the finest fluffy on the inside crisp on the outside chip. He also spent approximately 72 years investigating which type of potato to use, but hey - he's Heston.
﻿
It is the omelettes, however, that cause some people the most grief this week. The perfect omelette is a rare and beautiful thing, and before we start we must prove the omelette pans. Note we don't use any non stick cookware in the kitchen - non stick surfaces have a habit of flaking off eventually and finding their way into the food.  To prepare, or prove, the pan, put in rock salt (which has a nice rough surface) and then over the heat shake the pan and swirl the salt around. This essentially scours the pan and gives a clean, smooth surface which you then wipe out with kitchen towel and a wee bit of oil. We cook a two egg (nothing else except salt and white pepper) omelette in clarified butter. As it cooks, draw the sides to the centre with a fork - I need to take more photos don't I - until it reaches a stage where it is set but still moist (not runny) - the word for this is baveuse. At this point fold two sides in and turn it out onto a warm plate so the beautiful bottom is the presentation side. At this point it can be split and filling added. Most people would generally fill the omelette while it was cooking, but that is not the City and Guilds way.
Dishes of the week for me are the Falafels with yoghurt sauce, and also those we stir fry: Hokkien noodles with prawns and Stir Fried Beef with vegetables.

The lowlight of the week happens early Monday, with tongue stud girl proclaiming her intention to get a nipple piercing. Now this isn't a quiet aside in the girls' changing room you understand. No, it is  a veritable announcement to all. By Thursday she treats us to a description of how f-ing painful it is. Not much sympathy ensues. Fortunately we aren't asked to bear witness.

Baking next week - everything from scones to fruit flans. I'll take more photos, I promise.
Posted by Happy Cook at 10:29