Week 9: It's not about the food 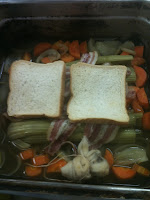 It  gradually occurs to me that everything we do, at least in this part of the course, is about the technique not the food. What really drives this point home is braising celery. Who would eat this? You'd have to be a total celery freak - and even then you'd struggle to find something appealing about it. Regular readers of this blog will know I ventured towards the depths of despair with poaching, steaming and boiling, however braising is running a close second. I mean, look at this picture - this is food blasphemy. Don't even ask why the bread gets slapped on top - I have no idea. We were probably told, but the trauma of having to create such a monstrosity has probably erased it from my memory.
Other vegetables we braise do not suffer so ignominiously: the onions are delicious, the leeks - well, like the onions there are much better things to do with them but they are edible, if not desirable. Actually the onions are quite nice as they have bacon stuffed in them, and as even vegetarians know, everything tastes better with bacon. 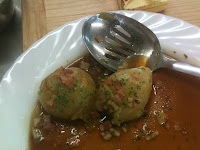 Meat fares better: slow cooking is the friend of tough cuts and sinewy pieces, and game birds. For those asking "what is braising? isn't it the same as stewing?" here is the answer you've been waiting for: the differences are not that substantial, so pay close attention.

In relation to meat, both methods are suitable for less tender cuts and use long, slow, moist heat cooking methods which breaks down the collagen and delivers more tender result. In both methods the meat is seared/sealed first. Stewing uses smaller pieces that are totally covered in the cooking liquid while braising is for larger cuts or whole joints which are partially immersed in the cooking liquid  - between 1/2 and 2/3. Indeed, braising is a sort of combination pot roasting and stewing. Confused? Imagine how we feel - you won't have to answer exam questions at the end of the year!

The Lamb Shanks are the best thing we do all week. 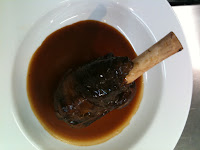 That and the Boulangère Potatoes. And the Rice Pilaf.  At the risk of repeating myself, the stock makes all the difference. I have braised lamb shanks many, many times in the past and the ones we do at school, using properly made beef stock, are beyond delicious. And I finally achieve a Distinction in my assessment, as do a few of the others.
Lots of out-of-kitchen activity this week: Jiggly guy is a bit hyper over some young thing he, somewhat inadvisedly, went home with one night (dot dot dot). She is texting and calling and turning up on his doorstep with her kids (she's 21 - he's 37 remember). He says he tells her he's not interested but is probably giving mixed messages by replying to texts and letting her in! His mood this week is a total contrast to last week. Having custody and access battles for some time, he was buzzing as he got to parent his two kids for the week while their caregiver grandparent was in hospital. Apparently it all went really well and he is incredibly chuffed to have positive reinforcement from the ex in-laws.
In the meantime,  tongue-stud girl is pursuing Jim (I decide Dumb and Dumber might be a bit unfair so I am rechristening Dumb and Dumber Jim and Jeff the two characters in the film. Yes, I do need to google it as I haven't seen the film, in case you were wondering!!)  In the middle of the week she has a set-to with her ex boyfriend, which apparently results in him trying to run her over. There's rumours of a non molestation order. Talk about dangerous liaisons - and not the egg and cream kind.

Jim tells me he doesn't want to work as a chef, or do anything in the food industry. So why is he doing the course? He has to do something to show he can meet requirements and finish. I ask how it's going so far and hear he's trying! Yes, true, but not in the way he thinks. Loving our tax dollars at work on the student guarantee scheme.

In class there's always lots of guffawing about any food related term that can carry any innuendo: joints; frenching (as in cutlets); breast; faggots; stuffing - the list is endless and the tutor is as inclined to incite nudge nudge behaviour as not. I am moved to remark one day that it's like being back in the 4th form: our tutor says that was as far as he'd made it before entering a kitchen. Pony tail, who has a pretty dry sense of humour, rejoined that 4th form was the best three years of his life!

So that's it for this week. Next week we have more classroom time studying Nutrition. I wonder if I will see my classmates' diets of pastries, chips and meat pies change. After that it's on to frying, so I suspect not!
Posted by Happy Cook at 16:58