Butter mountain - defined by agriculturedictionary.com as a popular term for vast quantities of dairy produce in the form of  butter, which has been paid for by EU governments and put into cold store. By further definition, my own, the mountain is depleted by French classical cookery and the City and Guilds requirements to turn even the healthiest foods into hideaways for butter and salt - the twin evil enemies of arteries, but also the dynamic duo that make food taste good! So even in a week when we are engaged in the prosaic pastimes of boiling, steaming and ...yawn... I forget....oh yes -  poaching, kilos of butter are flowing around the kitchen and, ultimately and inevitably, onto the hips of unwitting diners. 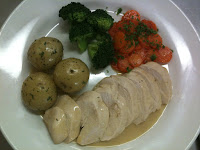 The assessment for this week is Poached Chicken with Mustard Cream Sauce, Minted Potatoes, Vichy Carrots, and Steamed Broccoli. Having added Creme Fraiche to the sauce, tossed the new potatoes in butter before adding mint, and cooking the carrots in butter, you would think the steamed broccoli at least will emerge unscathed: but no! my assessor's feedback is that everything is very nicely cooked but I have not tossed the broccoli in butter (as required) or seasoned it with salt. Arrggghhhh.
However, I do still achieve Merit - was it the lack of butter and salt that kept me from a Distinction???   Next time I will ask.  It isn't a plate of food that excites me, though when transported home and reheated the hunter-gatherer eats it without complaint, and professes it delicious.

So you will gather that after the highs of sauces and stock making, I am less enthusiastic about this week's activities. I know why the course must cover the basics and I do expect days or weeks like this. It doesn't get more basic than boiling cauliflower, steaming broccoli and cabbage, boiling pasta and rice, and boiling and poaching eggs! We also steam bake fish en papillote (in a paper envelope), boil corned beef, make steam puddings and custard, poach pears and turn more potatoes - so we can toss them in butter and parsley.

Looking on the bright side, I learn a few things. Well, two things actually: how to pre-cook various foods for ease of final preparation during restaurant service; and more excitingly how to poach eggs in a vortex. Very sci-fi don't you think? Start with a deepish pot water to which you add a little white vinegar (this helps set the white). Bring it to the boil then you reduce to a fast simmer. Now, create the vortex! to do this simply swirl the water around into a fast moving whirlpool. 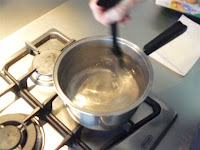 You can use a wooden spoon or similar to do this.

Quickly drop in the eggs (probably only 2 at a time) - and I do mean quickly. When doing this at home again at the weekend I didn't crack one of the eggs cleanly enough and the egg went in a bit slowly. The speed of the water movement meant that the white sort of separated from the egg, which clearly is not the purpose of the exercise. 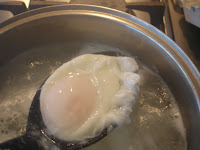 Poach the eggs for about 3 minutes then remove and place in ice water to stop the cooking. They are easy to handle at this stage and you can tidy up the raggy edges for better presentation. Reheat in hot water when you need them. Possibly more of a cafe or restaurant thing as you can refrigerate the eggs ready to reheat when needed. Anyway, call me easily thrilled, but I think it's cool! The eggs cook evenly and you don't end up with those snotty white bits you sometimes get with regular poaching. I tried to take a photo of the egg in the vortex but the foamy bit of white on top of the water mean you can't really see anything useful, so sorry about that.
One other thing I learn is that the inside temperature of cooked chicken should be 77 degrees Celcius. Be prepared for frightening statistics and horrifying stories of bacteria when we complete the Food Safety unit in a couple of weeks. I have already vowed never to eat anything from a bain-marie ever again unless I take the temperature of the water beforehand.
Things are shaking down in the class a bit. Dumb and Dumber, whom I haven't introduced you to until now, have both had warnings about attendance and timekeeping. The best thing they could do it drop out - for all our sakes. I know they are 16 or 17 year old boys with all the attendant idiocy that comes with that, but as Nigel Latta says "they're not right in the head" through these years. So, when our tutor talks about cinnamon and how it is used sparingly and cooked in dishes, never used "raw", Dumb has to eat a teaspoonful;  when we are preparing chilli Dumber has to eat a whole one, and so it goes. It they showed some enthusiasm for the course and had some ambition for the skills they could develop, you'd be prepared to cut them some slack; but as it is they slouch from one thing to the next, ask questions about what we've just been told, don't clean as they go, forget to bring their uniforms.... On the other hand, our international student from Kenya, a hulking lad of 18, is keen and focussed, even if he did come to New Zealand more for the rugby! And the young women are full-on into it and good fun to work with. But God, it's a long time since I was 17!
Posted by Happy Cook at 14:15